The final installment of Andrew Leeder’s “Roots to the 92” is here today. We thank Andrew Leeer for his time on this three parter, and remember readers, we also have a competion to enter! 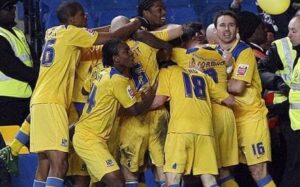 The achievement of doing the 92 can be completed in many ways. Some tackle it as a sprint, such as Ed Wood, aiming to complete the 92 (93) league grounds in a World Record Time. Sometimes it takes decades, such as with Southend United fan Andrew Leeder, author of the book “Roots to the 92” (get it, Roots, Roots Hall, home to Southend United, Roots to the 92…). In Andrew’s book, he details his experiences of the reaching 92 league grounds, confirming something all ground hoppers seem to love – The predictability of the unpredictable! We chatted to Andrew about his experiences, in this, the second part of a three-part series from Andrew and his experiences. To see part one click here, and for part two click here.

What are the lasting memories of your travels? 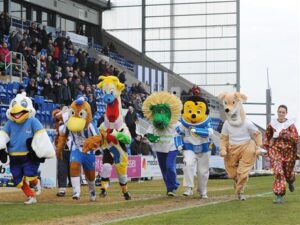 Not an everyday occurrence…

Grounds aside, memories are always to be made in meeting up with friends old and new, and of never quite knowing what to expect. It can start off being a bad day, traffic chaos ruins your pre-match meeting plans and then your team contrives to play woefully. But the joy of football is never quite knowing what will happen next, and that last minute goal to clinch an unexpected draw can make it all seem worthwhile.

What was the funniest experience on your travels?

Certainly one of the funniest was, somewhat ironically, at Colchester’s new ground. At half-time a few seasons ago a mascot race around the perimeter of the pitch had been arranged, and our two (a Shrimp which resembles a member of the Ku Klux Klan and something called Elvis Eel, the origins of which no one is sure about) lined up with various representatives from High Street stores and the local Colchester hero Eddie the Eagle.

Now, Eddie was up for this, started like a bullet, and was soon romping ahead. Southend’s pairing had different ideas, knew that they were not exactly fleet of foot, and instead of trying to catch up, slowly ambled to the corner flag on the back straight. Eddie, wings pumping stoically, had built a substantial lead by the time he reached them and was looking well pleased with himself, before Sammy took him out with a headbutt and Elvis waded in to make sure he stayed down as assorted primates, birds and a white thing chugged past to steal Eddie’s moment. As Sammy and Elvis were taking bows from the ecstatic traveling Shrimpers, Eddie, intent on vengeance, grabbed a corner flag and made his way towards our two heros before being restrained. Pure magic, despite a woeful defeat on the pitch.

As with the ‘best’, a choice of least favorite can be swayed by the result experience. Losing 6-2 at Aldershot was far from a highlight, and outside of the 92, seeing Southend going down 1-0 in the FA Cup at Aylesbury with the man on the tanoy singing ‘oh when the Ducks go steaming in’ as we walked out was not great.

But, as much as I liked Layer Road, Colchester’s new soulless concrete block leaves me feeling a bit chilly. And, if the wind is blowing through those open corners, it can make you yearn for the final whistle and the suicidal dash across the A12 slip roads back to your car. Sixfields too is not the best, the kids that get a free view on the surrounding hill with its attraction of paying ‘rolly-polly’ to relieve the boredom if the match is poor probably have the best position, and as for the away end at Priestfield, well, in anything more than a force four it can make you feel a bit queasy.

There is only one ground though I never want to go back to. I’m a bit superstitious, and both of my visits to Swindon’s County Ground (admittedly many years ago) have seen me experience near death and then be around death itself. Third time unlucky and all that.

You recently “topped up” on the Queen Elizabeth Stadium/Olympic Stadium/Council House to get back to the 92. What are your thoughts on it?

Well, it’s ‘nice’ – unrestricted views, plenty of leg room, the toilets don’t smell too bad, and look back at it on the way out on an evening game and the lighting is classy. The Hammers fans even managed with some gusto a couple of loud renditions of ‘Bubbles’ which filled the place with sound. But I think Brady, Gold and co are going to have to work consistently hard coming up with new things that put fans first to make it a place old East End diehards will keep wanting to go back to – on the way in we spoke to many cynical folk in the long queue for a programme who seemed far from convinced about it all. Personally, I quite liked it, but more as a place to go to a final for than somewhere I would want to call ‘home’. What future ground hopping plans do you have?

I’m not sure. I’ll aim to keep the 92 up to date, and in moments of less clarity am tempted by chalking off the few left I have not seen in the National League Premier to do the ‘116’. Another interesting one to do could be to see games at all of the grounds remaining that have seen English league football – so that will bring in the likes of already-been-to Wembley (where Orient once played a couple of home games in the 1930’s) and Gainsborough Trinity’s Northolme which last saw a league game in 1912 but is still going strong.

I’ve also always fancied picking an FA Cup tie in the Extra Preliminary Round and following the winners all the way to Wembley, but just know that will be the year that Southend win at the Emirates in the sixth round whilst I am having to be somewhere else, so to date I haven’t taken that one up. I’ll sleep on it for now.

Finally, as we all know the 92 can sometimes only last a season if relegation and promotions go against you – who will you be looking to come up from the National League, to complete the 92?

The Racecourse Ground, Wrexham – A former member of the 92, now fighting to get back in, and on Andrew’s list!

Last season I was lucky as I’d previously visited both Cheltenham and Grimsby, though looking at it another way it means that I am missing out on new experiences and that’s really what it’s all about. With that in mind I’d quite like to see Wrexham finally get back to the Football League – I’ve never been to The Racecourse and I’ve always thought that it looks to be a place with character as well as a splendid history. Just to keep down traveling costs, if Braintree can continue to work miracles and go one better than last year then that would be something to look forward to.

Thanks to Andrew for taking the time out to speak to us. “Roots to the 92” is available direct from the publisher Completely Novel (paperback only), or from Amazon (Kindle version or paperback). To find out more about Andrew and his journey to join the 92 club head to his website, Facebook page and Twitter. Don’t forget to enter our Twitter Giveaway to have a chance to win a copy of “Roots To The 92”!