Dutch football has produced some of the best football and footballers our planet has ever seen. The invention of ‘Total Football’ from Ajax and further expansion with the national team to lead European and International football, and the introduction of some of the best coaches and footballers the world has ever seen. Clubs such as Ajax, Feyenoord, PSV and more recently Twente, have been competitive in European football competitions. Arguably one of the smallest nations to maintain such a prestigious hold within European football circles.

But what lies beneath the glamour of the illustrious clubs? I went to see some Jupiler League (second tier) action as MVV Maastricht hosted Helmond Sport at De Geusselt as the league restarted after the winter break to find out. 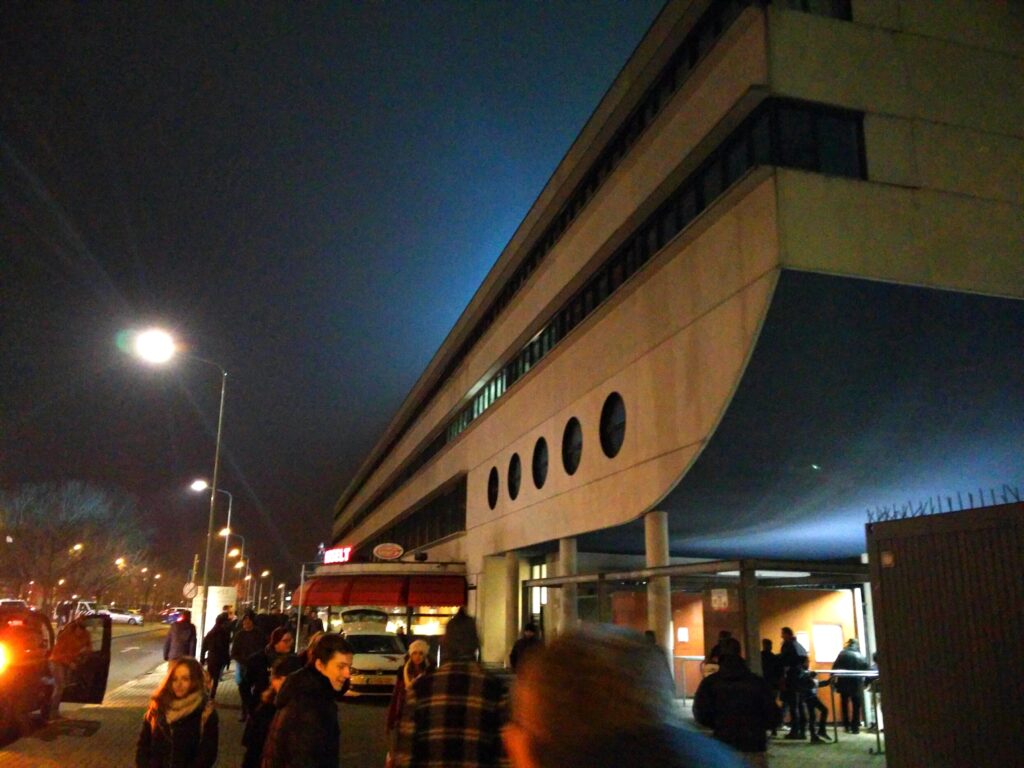 The main stand from the outside at De Geusselt.

I had visited Maastricht before, a smart city with a little of over 100,000 inhabitants, in the very south of Holland, on a triple border of Germany and Belgium, 30 kilometers along the River Maas, which the city is named, from the Belgian city Liege, and 40 kilometers from the German city of Aachen.

It was a bitterly cold night in early January, meeting a friend of mine who I had met in the previous summer in Albania, where we had discussed MVV and De Geusselt, the host stadium for the day. We dropped our bags, and picked up some food on the way to the stadium, via the train station footbridge. The tall beaming floodlights were visible as we crossed, bright through the clear crisp winter air.

A 15-minute walk through a housing estate, the floodlights, and the inconspicuous McDonalds arches, our guiding light, lead us towards De Geusselt, a 10,000 all-seater stadium. It was built in 1961, replacing a former city center ground (sounds all to familiar, although a little earlier than the British are used to), with a capacity of 18,000, but a renovation in the 80’s lead to it’s current capacity. 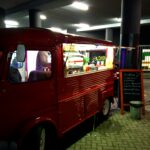 The cute little food trucks at the stadium.

The front facade of the main stand greeted us, a grey-clad structure which had a nautical feel to it, with circular porthole-styled windows. Our entrance to De Geusselt was to the right, where we would stand with the Ultras in the Hoofdtribune (Main Stand) of the ground, our entrance a cool 12€.

As I walked into the stadium, two ornate food trucks were dishing out locally sourced and produced food, for a bargain, however, I opted for a more refreshing beaker of the local grog, denting my wallet to the tune of 4€. I stood to admire the compact stadium, as the intimidating floodlights loomed high and bright over De Geusselt, the pesky arches still hovering in the background.

I had immediately noticed that the pitch was artificial, which, I was informed, was not too uncommon for Dutch teams. My next observation was that all four stand were, well, stood high up, raised away from the pitch, and maybe not what I was used to. 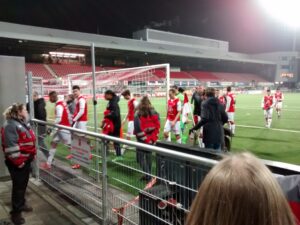 The players tunnel goes across the walk way. 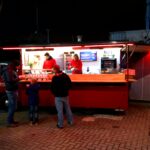 Another of the food truck to serve fans.

Normally I would expect to see the seats race all the way down to the pitch edge. On reflection, it made sense. Smaller grounds, that weren’t full, rarely had fans packed in at the front with open space at the back of the stand. No. It was the other way around. The view better at a higher viewpoint. Ah, the forward-thinking Dutch.

As I approached my seat, the players were leaving the pitch directly in front of me; the tunnel to the changing rooms was going directly under the stand, but not to the side stands like many grounds, or even into the corners like at Old Trafford or Craven Cottage. No, this was just to the side of the goal, past the walkway of the stand, which had to stop spectators passing as the playing staff moved through. 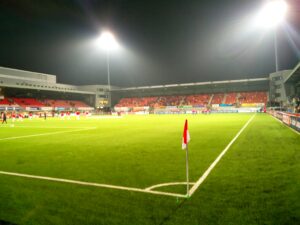 The artificial pitch and corner flag waft in isolation as the players warm up.

I climbed the steps from a sunken pitch side into the raised stand, the sweet smell of marijuana hit me. I’d forgotten, the legality of this behaviour isn’t questioned in Holland, a few of the Ultra’s indulging in this.

As the game got underway, we asked our host, who the better players to watch out for were and tried to find out if there were any players that we may have known, only for this to be a resounding no. The game was sprightly, and as I’d expect from dutch teams, positive, quick and technically good. Helmond Sport took the lead after 15 minutes and doubled it just before the stroke of half time.

After yet more refueling of beverages, I wondered around the ground, noting that the corner sections were mostly offices and not corporate hospitality like I would have thought, although a couple might be used for such occasions.

The second half fired up again, and quickly Helmond Sport were now three goals to the good at De Geusselt. And not long afterwards had made it 4-0. The home fans were not impressed, their anger was shown through loud ferocity. The MVV manager made some changes. I’m not sure if it was the substitutions or the scoreline that seemed to swing the game, with MVV starting to look like De Geusselt was their home ground, but something changed. As it was the newly introduced MVV substitute that pulled a goal back, I am going to go with the tactical nuances of the manager. And suddenly MVV were back in the hunt, pressing, pushing, the game now a contest. The fans raised their voices. A few chances, a glancing header just wide, a one-on-one with the keeper just sliding wide, another shot hitting both posts and back out! Incredible stuff! The crowd were raucous! 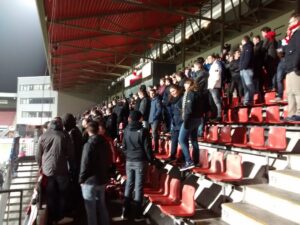 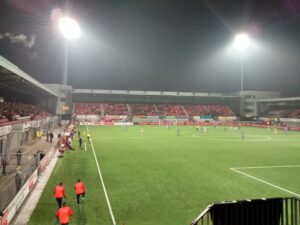 The view from our seats, with the floodlights beaming down from on high.

But none of the chances converted into goals. And the business of football is goals. And the time eventually ran down, as did the spirit of MVV, who had, for twenty minutes, battled valiantly to get back into the game at De Geusselt.

We cheered the players off the park, right by the tunnel under the stand, then headed into Maastricht for more evening beers, discussing the failing of MVV as we crossed the river into the scenic historic old town. As we discovered that evening, Maastricht was a beautiful city, vibrant enough for the number of inhabitants, with a smart, young slightly affluent crowd. The large university, which attracts a large number of expatriates for the size of the city, also plays it part in fueling this. This was my second time to Maastricht and my first to De Geusselt and the football, and both times were highly enjoyable!