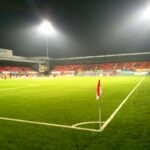 Dutch football has produced some of the best football and footballers our planet has ever seen. The invention of ‘Total Football’ from Ajax and further expansion with the national team to lead European and International football, and the introduction of some of the best coaches and footballers the world has ever seen. Clubs such as Ajax, Feyenoord, PSV and more recently Twente, have been competitive in European football competitions. Arguably one of the smallest nations to maintain such a prestigious hold within European football circles. But what lies beneath the glamour of the illustrious clubs? I went to see some… Read more »