Blogger Michael Pilcher took advantage of the FA Cup scheduling to tick off the furthest ground left on his 92. The Riverside Stadium was the destination in the second part of a 2-in-1 weekend doing the 92 leaving just 5 grounds to go.

Part 2 of my footballing 2-in-1 weekend was a trip to Middlesbrough’s Riverside (Part 1 for those interested is here). A Premier Inn in Stockton-on-Tees was my base for Saturday night – a very modern Premier Inn it was too, excellent value as ever from PI at £36. Twenty minutes or so from Hartlepool and a drive of mere minutes from the Riverside, for my purposes it was pretty much ideal. It was also handily near a cinema, which allowed me to gain some massive brownie points with my wife. I’d been promising to take her to see Fantastic Beasts and Where To Find Them since it came out but never quite got round to it, and all our locals had stopped showing it. I thought I’d give the Middlesbrough Cineworld a check and, lo and behold, they came to my rescue with a showing on Saturday night. Gold star for me for that; turning a footballing weekend into a ‘date weekend’.

The date weekend angle continued into Sunday with an extended bout of morning/early afternoon shopping. In addition to the town centre Middlesbrough boasts not one, not two, but three retail shopping parks, all located fairly close to one another. I managed to duck out after the second, citing my need to get off to the footy, leaving Mrs P to sample the delights of the third for a few hours. I was dropped off around a mile from the ground and enjoyed a brisk walk up to it; as it was getting closer to kick-off there was a throng of supporters making their way over, decked out in red & white scarves and red shirts. Set amongst the industrial Teeside skyline, it really was like a scene from a Lowry painting. I followed the crowd and after descending down a large overpass, I got my first glimpse of the Riverside.

The external is certainly very impressive. It’s a ground I still regard as a new build, but apparently it’s now entering into its 21st year as Middlesbrough’s home – at what point does a new ground stop being ‘new’? It ticks all the boxes from what I want/expect for a ground exterior – imposing, a big sign saying the name of the club and the ground, massive representation of the club badge (two, in fact), and some indications of the club’s colours. There is a nice nod to the club’s past with two statues of club legends betwixt the old entrance gates to Ayresome Park. Inside it’s much less exciting, just a sea of red seats with ‘Boro’ and ‘MFC’ half-heartedly spelt out in white seats in two of the stands. Modern and basic with great facilities; a basic description for the Riverside as it would be for so many other newer grounds across the country. The West Stand was elevated above the other three stands to give a lopsided feel, which seemed to be the only thing to note inside. I was sat in the South Stand; I say sat, the fans in this end were allowed to stand throughout – a section ripe for safe-standing, surely. With it being close to the away enclosure, this was certainly the most lively of the stands and definitely the place to sit/stand when you come to tick off the Boro. 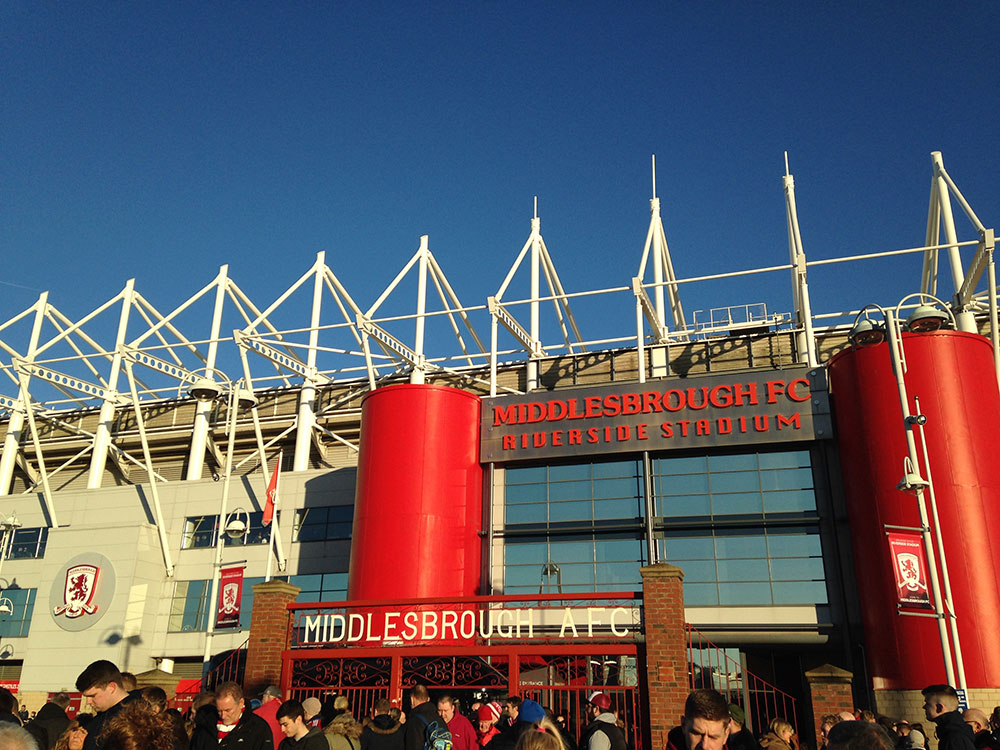 Just as the game I’d visited at Hartlepool the day before was poor, this one too was shaping up to be as boring, if not worse. It was clear from the fans around me that that entertainment has been in short supply this season, with Boro ever happy to pass it from back to front, then get to the front and pass it all the way back, and repeat. Alvaro Negredo ploughed a lone furrow up front, with the talented yet infuriatingly inconsistent Adama Traoré offering little support. He seemed scared to run into space, and in truth the same could be said for his team-mates too. There would be a player screaming for the ball out on the wing, but the Boro players would nearly always opt to pass to the team-mate closest to them. You couldn’t even really defend it by calling it a ‘tactical battle’, Boro were hesitant and Wednesday were happy to soak up any pressure. The first-half saw a grand total of zero shots on target, and it looked like I had yet again managed to pick a dud tie. Then all of a sudden the game burst into life around the hour mark with some actual incident.

Barry Bannan was yellow carded for a foul, after a delay Grand Leadbitter lined up the free-kick for the home side and curled it into the bottom corner. From the kick-off, a string of passes found the ball being played through to Wednesday’s Fernando Forestieri who was clattered by Daniel Ayala; red card for the Boro defender. I’m not sure how long there was between goal and red card but it felt like a matter of seconds. The South Stand faithful weren’t happy but from my neutral’s standpoint it seemed a definite red. Yet despite edging possession thereafter, the visitors just couldn’t find a way through a resolute defence. Brazilian defender Fabio came on after the red card and he played a big part in that, harassing the opposition and making a number of well-timed interventions and tackles to stop Wednesday in their tracks. The ten men of Boro took full control when the hard-working Negredo grabbed himself a goal, closing down young keeper Joe Wildsmith who succeeded only in booting his clearance against Negredo and in (a goal worth checking on the BBC highlights, if only because it’s a rarity to see these goals come off). Playing it out from the back: therein lies peril. There was still time for Boro to add some gloss to the scoreline, clinically finishing Wednesday off in the 90th minute as Marten de Roon picked up a rebound on the edge of the box and smashed home.

Walking out after the game, the illuminated Riverside looked terrific lit up in the early evening darkness. I was surprised at how good the atmosphere was considering it was a reduced attendance cup game, and the last half-an-hour had saved what was looking like a dull 0-0. I met my other half in a nearby Costa where we waited for the match traffic to die down and got ourselves ready for the long drive home – we had to go via Preston, so I was eventually back in Kent by 2am, just the four hours before I needed to be up again. I had my two furthest grounds in the bank though and was down to my last handful of those still to tick off, so any tiredness I felt on the Monday was 100% worth it. A successful weekend up in the North-East, visiting two grounds on very different ends of the spectrum.

Atmosphere 3.5/5: Decent levels of noise from the South Stand, sparring with the opposite North Stand and the away end. The Wednesday fans were in good voice up until conceding.

Location 3/5: With it being an out of town stadium it is somewhat isolated.

Programme 1/5: A massively reduced, flimsy effort for £2 with very little going on inside. Never going to approve of that.

Character 2/5: Any character lies in the exterior, with little of interest inside. No design flourishes or quirks, just a big generic red stadium.

Overall 3/5: A nice functional ground, although a bit bland inside. The locals were friendly and the atmosphere was better than expected.

Have you made the trip to the home of Middlesbrough? If you have you can add the Riverside Stadium to your 92 or if not plan your trip there: