On his quest to join the 92 club blogger Peter Briers takes in a thrilling Friday night encounter as promoted Cambridge United head to the Pirelli Stadium to face top of the table Burton Albion.

Thoughts on the ground:
It’s unusual to visit a new style ground that’s primarily standing, but a massive positive in my opinion. The Pirelli has terracing along 3 sides of the ground with the main stand being all seater with the usual hospitality boxes. The ground has been well planned and designed with the common faults of older grounds like bottle necks, lack of space on/in the concourse, poor facilities etc a thing of the past. 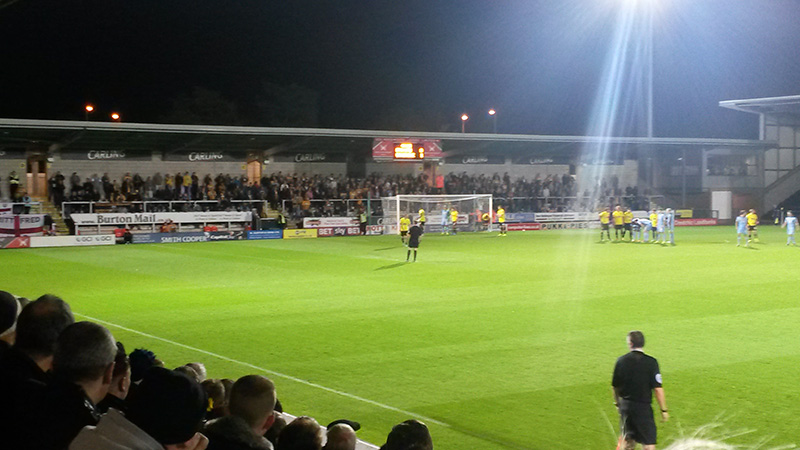 Thoughts on the game:
Not having watching either of these teams in the flesh for a long time i didn’t really know what to expect but was pleasantly surprised. Newly promoted Cambridge came out of the traps fast and in the first ten minutes or so were on top, but the home side, top despite a recent wobble grew into the game and had the majority of the play. Slightly against the run of play the away side took the lead, Dunk found space down the left to cross for the towering Elliot to nip between defenders and power a header at goal that despite getting a strong hand to McLaughlan couldn’t keep out.

The Brewers changed it up at half time bringing on an extra front man to try and get back in the game and it almost worked. The substitute Blyth was sent through but fired his shot just wide of the post. United doubled their lead soon after, Dunk again the provider for the impressive Ryan Donaldson to slide into an empty net.

The home side felt aggrieved as the ball appeared to strike Robbie Simpson on the arm as they pushed to get back into the game, but the appeal fell on deaf ears. To rub salt into the wounds as the referee waved away their calls the U’s started a flowing counter attack which saw Donaldson release Elliot who finished clinically to put the side 18th at the start of play three up. Burton did manage to grab a consolation ten minutes from time Akins low shot creeping in through Dunn at the near post. 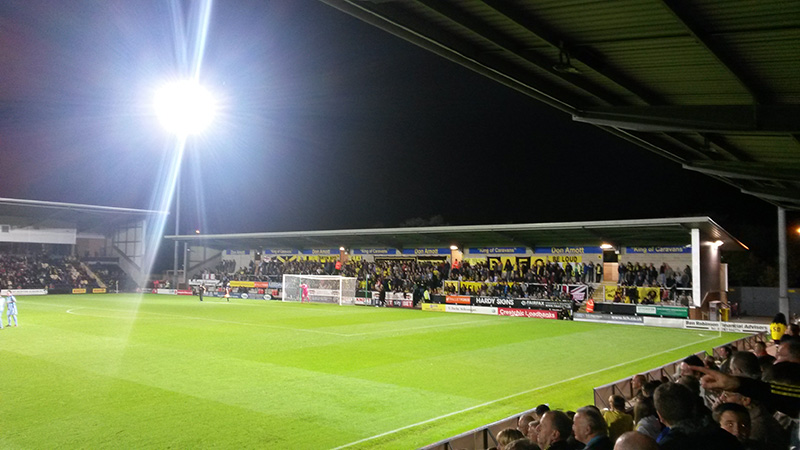 Atmosphere 4/5:
The atmosphere was really good. Despite a crowd of around 2600 there was decent noise from both home and away fans behind the goals at each end, better than i’ve experience with more than double a crowd of that number. The home fans on the West Terrace were still singing and jumping around when their side were 3 down.

Location 4/5:
Very easy to find off the A38 and plenty of free street parking around the ground. A few pubs near by plus a Maccies and Subway en route is handy for fans.

Value for money 4/5:
£15 for an adult ticket on the terrace for evening of entertaining football. Food was reasonably priced too.

Pie Rating n/a:
The pies looked nice, but between us we partook in sausage and chips and a cheeseburger which really hit the spot.

Programme 3.5/5:
Good quality and served well as a quick read up on the opposition ten minutes prior to kick off.

Overall 4/5:
Really enjoyed my second visit to the Pirelli. Great atmosphere and entertainment, friendly staff and stewards. Having seen the Brewers lose an aggregate of 7-2 on my two visits i doubt the locals will want to see me back in a hurry!

Thanks to Peter for letting us know how he got on at Burton. You can see Peter’s 92 here. Have you been to the Pirelli Stadium before? Add it to your 92 here or if you’re thinking of going plan your away day using our planner here.