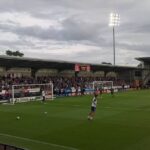 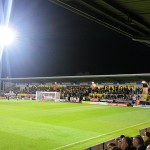 On his quest to join the 92 club blogger Peter Briers takes in a thrilling Friday night encounter as promoted Cambridge United head to the Pirelli Stadium to face top of the table Burton Albion. Ground: The Pirelli Stadium 46/92 (2nd visit there) Game: Burton Albion 1-3 Cambridge United Date: 03/10/2014 Thoughts on the ground: It’s unusual to visit a new style ground that’s primarily standing, but a massive positive in my opinion. The Pirelli has terracing along 3 sides of the ground with the main stand being all seater with the usual hospitality boxes. The ground has been well… Read more »