After that May crazy night in Moscow, rumours were rife that Ronaldo wanted a transfer to Real Madrid. The media were obsessed by it, but it came to nothing. Record signing Dimitar Berbatov joined with minutes to go on transfer deadline day. Promising full backs, Fabio and Rafael, the soon to be sold Tosic and De Laet from Stoke also joined the ranks. However, the biggest Portuguese star to departe Old Trafford was Ferguson’s assistant, Carlos Queiroz, who became manager of his nation, with Mike Phelan being promoted coming into replace him.

Often has it been said Ferguson, much like Brian Clough, relied heavily on his Assistants to provide the grunt work. Quieroz had previously left and comeback, but this time there was no return. 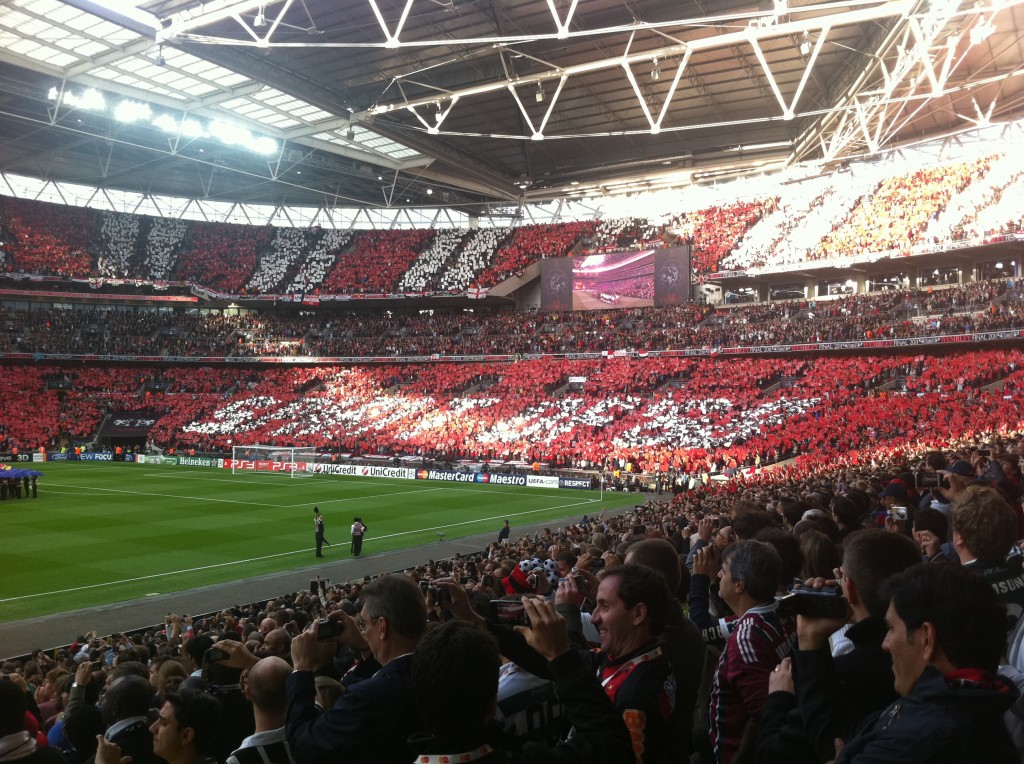 The United end for the 2011 Champions League Final

United’s early struggle in the league and eventual crawl from, what on paper, should have been an easy Group in the Champions League highlighted this. But as ever with United, after Christmas things picked up, but compared to the 2008 season, United just weren’t as fluid weren’t able to dismantle teams as they had. Ronaldo, the key from last season, not as efficient, effective, fluid or predatory. Quieroz was sorely missed.

The season closed in with United in the hunt of an unprecedented Quadruple, the League Cup already bagged. A dull FA Cup semi-final loss, on penalties, to David Moyes’ Everton ended it, but scintillating league form and a fantastic and confident crushing of Arsenal led United to a second Champions League Final. A second hatrick of League Titles, the first club to achieve it, was sealed against Arsenal. Barcelona lurked in the final in Rome.

A tactical disaster and insipid performances left United picking up medals first. With Rome barely a distant memory, the inevitable happened and Ronaldo departed for Real Madrid for a World Record £80m. A couple of other younger players departed too. Little of that staggering fee was reinvested in the squad, with Antonia Valencia joining from Wigan and a pinned together Scouser Michael Owen joining on a free with little else to mention. United had other rumoured interests, which went transferred elsewhere. The fans were disgruntled. 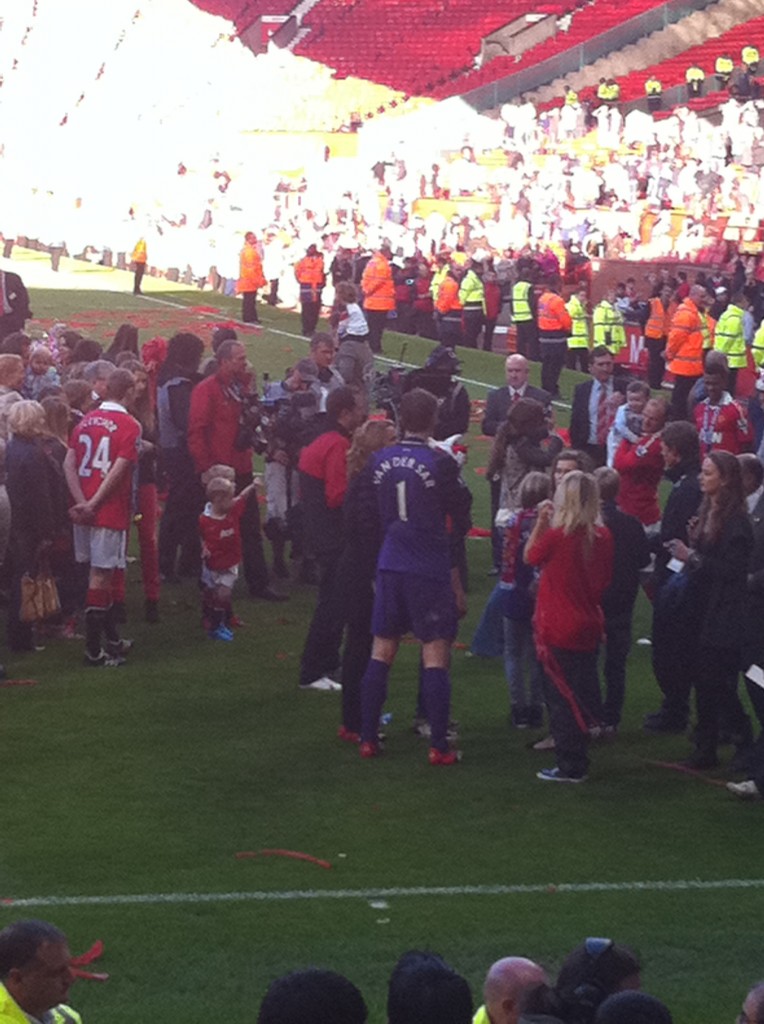 In the financial reports, United had developed huge commercial and TV revenues. Plus ticket prices had continually risen. Yet Ronalo was gone, Tevez had converted to City, and the squad was beset with aging players; Scholes, Giggs, Neville, Van der Sar, all in the later days of their playing days. The squad was lacking investment and the youth prospects, although brimming with potential, weren’t making their mark.

There was more noise off the pitch for the first time in a while, with the Glazers refinancing with PIK’s, Bond Issues and the sale and leaseback of the club’s training facilities. It was all rather complicated and difficult to understand to the average fan, but one thing was clear: the club weren’t handling the debt well and the refinancing deals and debt management, although spreading the risk and duration, were further complicating things.

Despite all of this, United were alway in contention for title in 2009-2010 season, but slipped at a key moment in the run in. That, coupled with a poor cup exit to Leeds and a disappointing loss to Bayern München in the Quarters of the Champions League. The only consolation prize was picking up the League Cup.

The fans revolt against the Glazer regime built momentum in the 2010 season, with the start of the Green and Gold campaign, where supporters were encouraged to show the original colours of Newton Heath in preference to the normal blood red of United, the highlight coming with David Beckham’s return to Old Trafford with AC Milan, who picked up and wore a scarf as he left the Old Trafford pitch. However, this did little to change anything, other than highlight the dissatisfaction at what was going on. 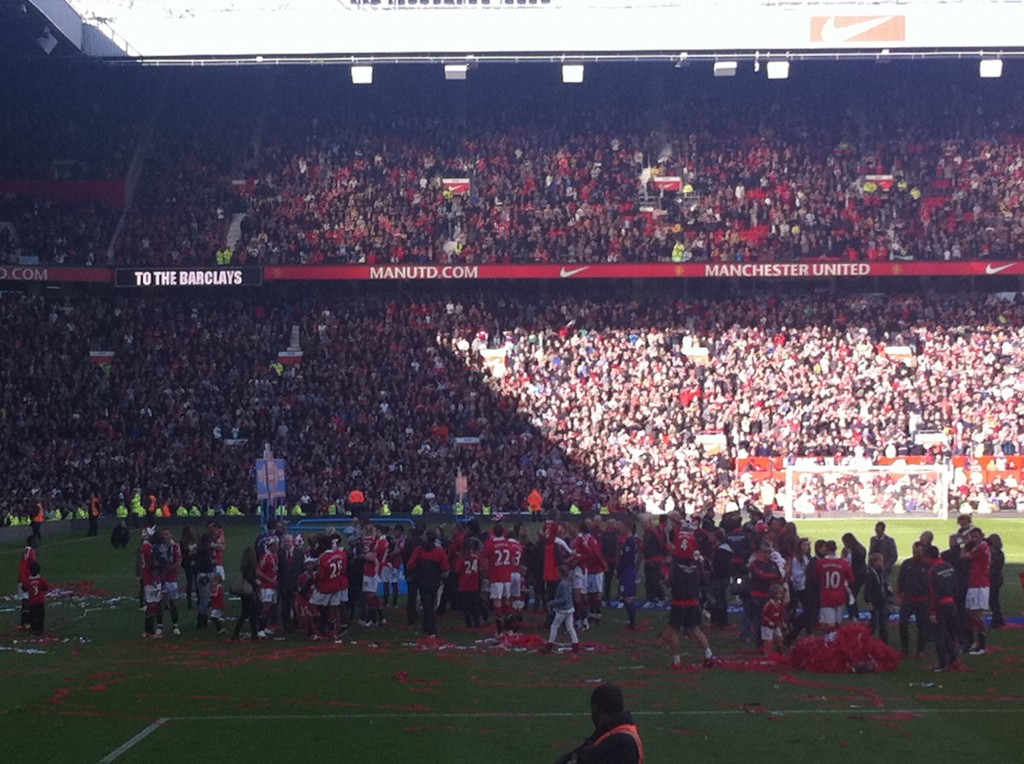 The transfer window after the 2010 World Cup was rather quite. United were linked heavily with a host of big names, but the careful acquisition of Javier Hernandez and Chris Smalling were positive for the future along with the calamity of the Bebé affair, however, there was still a lack of any significant investment from the Glazers, especially since the record £80m haul from the sale of Ronaldo, whilst across Manchester in Eastlands, the millions were being thrown about like confetti at a wedding.

The 2010-2011 campaign led to another league title, with Berbatov finally shining with great support from Hernandez, although not losing until February, the draw and goals conceded column were too high. The defending from Gary Neville had been a particular disappointment, and he surprisingly retired halfway through the season. An Old Trafford win against Chelsea was enough to all but win the 19th Title before a point against Blackburn secured it. United only had Chelsea, who were comfortably dispatched with two wins, as a blockade to read their third final in 4 years, meeting Barcelona for the second time. Despite being level at the break, United were unable to contain Barcelona who ran out comfortable 3-1 winners.

The end of the season also saw the planned retirement of Edwin van der Sar and the sudden, but probably also planned, retirement from a media shy Paul Scholes. Ryan Giggs was now the only remaining player from the infamous Class of `92. Rebuilding was urgently required!

What to have your say? You can tweet Michael @enjoycoca_ and us ( @the92dotnet ) on Twitter or leave your comments below.