Budding reporter Josh Green reports back on a groundhopping trip with a difference to the capital to witness a gathering of footballing legends. Former stars from across the globe descended on the O2 Arena for the Sky Sports Star Sixes.

The Star Sixes, a first of its kind tournament where the stars of yesterday collide in some titanic duels. Names such as Roberto Carlos, Deco and Paulo Di Canio, appeared during a spectacular four days of action. Surely a relatively amateur reporter such as myself wouldn’t fit in to such a star studded environment?

In usual fashion I arrived five hours early (just to make sure) on the opening day. Fighting my way through the horrendously busy tube link at London Bridge, I could only think to myself how big this opportunity was.

Months ago when my original email was sent to Star Sixes, more in hope than expectation, I could’ve only dreamed of being metres away from some of my childhood heroes. But the dream was alive.

As I stepped out of North Greenwich station to reveal the expansive O2 Arena I stood in awe, as a reporter that is usually confined to the backstreets of Peterborough or my home town of Deeping St James. The sheer size of the building had me in shock. 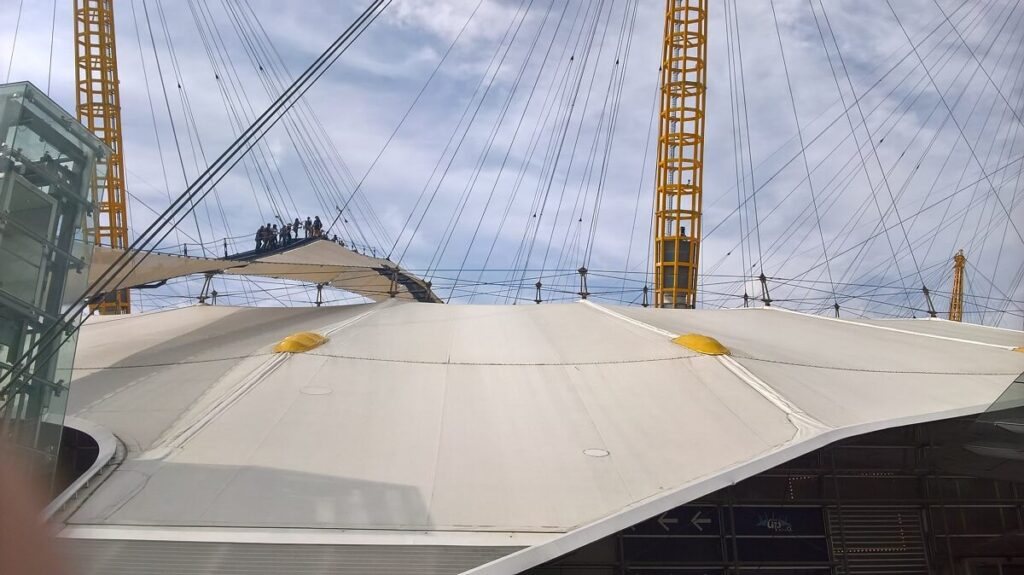 The London public shoved past me as I stood and stared, but nothing could take away this moment, I was going to be part of one of the biggest football events the O2 had ever seen.

I scuttled through all three bag checks before arriving at the media entrance, where I was greeted by a number of fellow journalists. Mixing and conversing with fellow reporters is something that often goes missing in the day-to-day life of a journalist. But co-operating with your fellow professionals still plays a huge part in journalism today.

After exchanging the customary twitter usernames I made my way into the venue. The media were housed at the bottom left hand corner of the arena, just metres away from the global superstars.

Despite some of the biggest stars in world football appearing from the tunnel by the second, I was able to keep my head. Then it was the turn of Brazil, a team that had captured my heart way back in 2005…

As the likes of Rivaldo, Roberto Carlos and Dida emerged from the tunnel, they received rapturous applause from the whole arena, journalists included. The big boys had arrived, and how good was it to see them back!

As the first day of Star Sixes drew to a close I made my way back to North Greenwich tube station, a place I would become very familiar with over the following days. 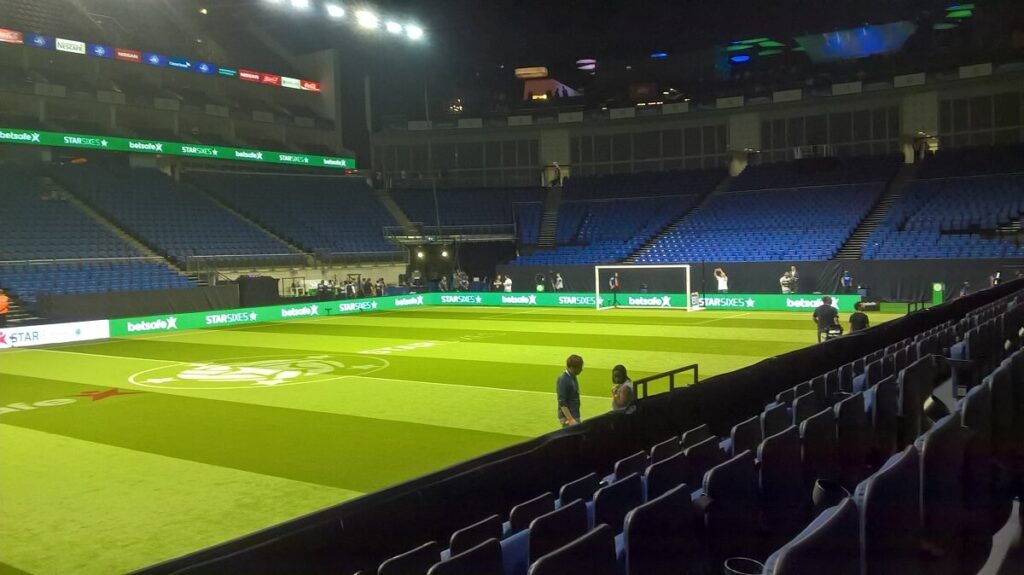 The 02 Arena ready for the Star Sixes

After an exhausting day at the O2 and getting home very late, I could only look forward to the remaining group stage games in what had been a sensational start to the tournament.

As day four rolled around, I couldn’t wait to get back inside the O2 Arena. Another chance to see some of the most well renowned footballers in action.

Learning my lesson from the previous visit I arrived with just a couple of hours before kick-off. I made the familiar trip to the media desk and was met with a surprise, instead of just receiving a regular ticket I was in with press room! A first for me in my career.

The press room was packed with well-known faces, many who regularly appear in our national newspapers and on our TV screens. It was a pleasure to be a part of such a gathering of well-respected journalists, and I finally felt like i’d taken a big step towards my dream job.

Following some pre match preparation, with half hour to go, I made my way into the Arena. The attendance was still lacking, I feel maybe they priced some people out of being able to get tickets. Anyway, I was there, ready for the action to begin.

Spain were first to take their positions, France their opponents. And after half an hour of battling the French came out on top. Denmark would upset the odds once again in the evening’s other semi-final, overcoming a surprisingly tame Brazil side. 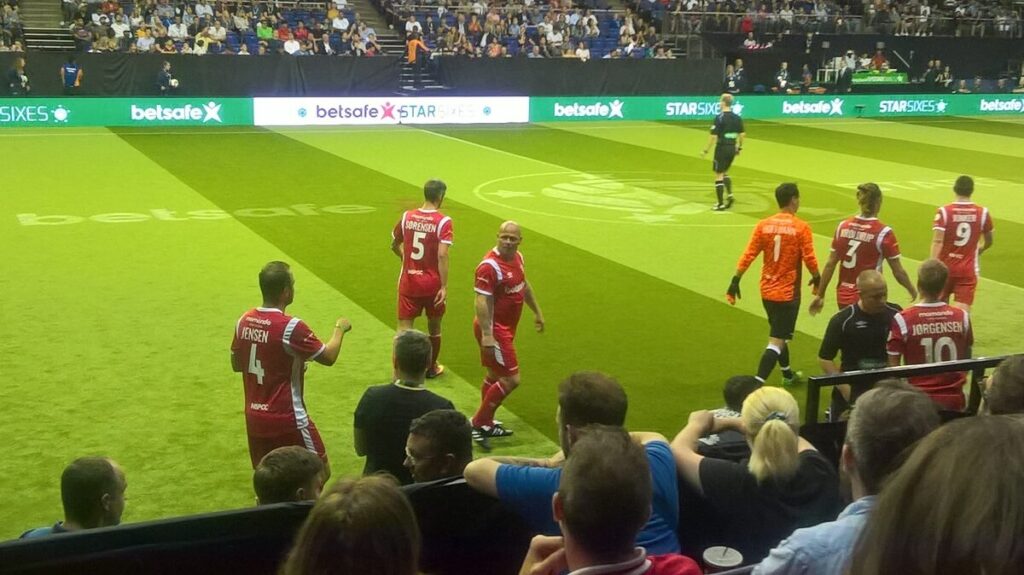 Finalists Denmark take to the field

The dreaded third place play-off was lacklustre at best, a physically shattered Brazil side unable to live with the tiki-taka style of the Spanish.

Now 12 sides were down to two. I gathered myself as the cream of the crop emerged, each player receiving a loud cheer. It doesn’t get any better than this! 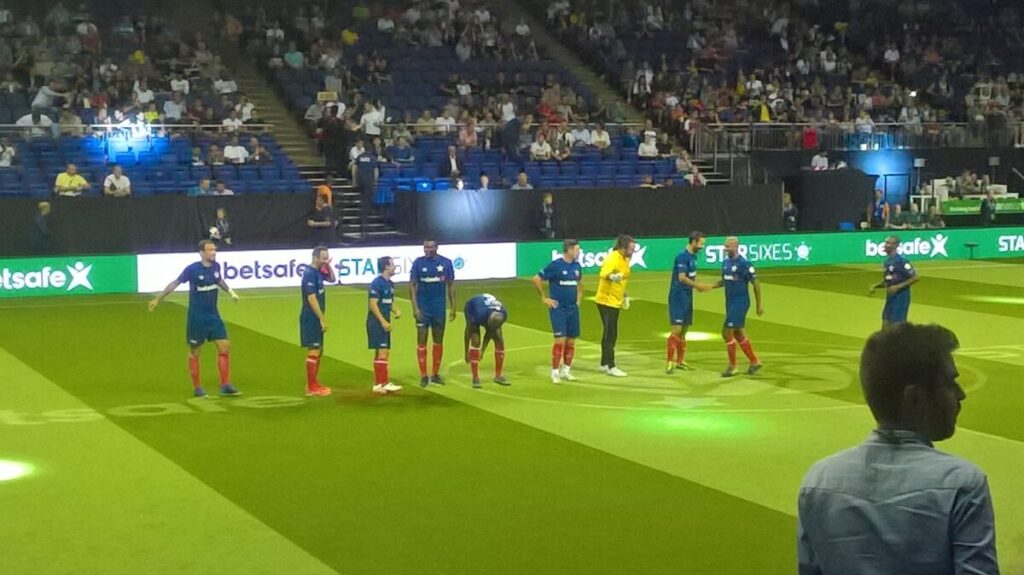 The French team in relaxed mood

France would take an early lead through Ludovic Giuly but Daniel Jensen would peg them back almost immediately. With so much on the line, it would become a tactical affair, each team not committing too many men forward in worry of losing it all.

With time running out Youri Djorkaeff sweetly struck the ball past the Danish number one, the goal that would eventually lead France to the trophy.

With the final whistle imminent I made my way down to the press area, hoping to meet a few of my heroes. Top scorer Michel Salgado appeared from the tunnel, and as sides were departing I hooked Per Kroldrup aside to grab a quick autograph. And as many have come to expect the Dane was more than happy to oblige.

I must mention both William Gallas and Robert Pires who stopped to sign for me outside the hotel, the duo are now in my good books.

Eric Abidal is the ultimate baller. Check out this for a cool finish! 😎

I have been collecting autographs for over five years, but seeing players of this magnitude is uncustomary compared to usual trips to the likes of Wigan and Port Vale. As I crossed the road, disappointed at only meeting 2 of the 121 players attending the tournament, Maik Taylor appeared.

To you he may just be a former Northern Ireland stopper, but I had been chasing him since I started autograph hunting; meeting him was real honour. He signed the obligatory autograph and posed for photo. After a five year chase I had finally filled a gaping hole in my autograph folder.

Taylor is the perfect example of how footballers should conduct themselves during fan engagement. I have previously written how signing autographs and posing for photos can do wonders for a players public image. Taylor, although not a global superstar, is well known to the average English football fan, and to see him so willing to talk with me was a real eye-opener.

Anyway back to business. As with the most shattering but exciting days of my career thus far drawing to close I decided to take a leap of faith. Sneaking into the players’ mixer where they were being interviewed by television journalists from across the world. I grabbed a quick word with Michel Salgado before he went off to celebrate with his teammates.

Despite crossing a few lines and at times being distracted from the job in hand it was a wonderful four days. I have learnt so much about how worldwide events are run, and what is expected from a journalist during these high pressure situations.

All while watching some true legends of the game. I would like to thank Star Sixes for this terrific opportunity and hope to see you once again next, wherever the tournament is staged.