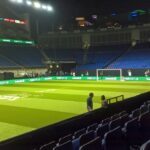 Budding reporter Josh Green reports back on a groundhopping trip with a difference to the capital to witness a gathering of footballing legends. Former stars from across the globe descended on the O2 Arena for the Sky Sports Star Sixes. The Star Sixes, a first of its kind tournament where the stars of yesterday collide in some titanic duels. Names such as Roberto Carlos, Deco and Paulo Di Canio, appeared during a spectacular four days of action. Surely a relatively amateur reporter such as myself wouldn’t fit in to such a star studded environment? In usual fashion I arrived five… Read more »