Blogger and the92.net co-founder Pete took a break from doing the 92 over the recent international break. Wales was the destination as the groundhopping Saints fan headed across the boarder to tick off a former 92 ground…

With a weekend away taking in a game in the bag from my Birthday in June it was to the fixture list to choose a location. As it was only going to be a short trip and not wanting to travel too far with only 13 grounds left on my 92 options were limited. And so, to plan b: former 92 grounds.

It was must have been meant to be too as the stars aligned; with Wrexham playing host to Eastleigh on Non-League Day.

Thoughts on the ground:

Made up of 4 distinct stands the Racecourse Ground only makes use of 3. Behind the goal the Kop with a capacity of 5000 is sadly no longer in use. Once the largest all-standing terrace in the Football League it now sits derelict. However, with the game selected for live coverage on BT Sport the Kop had a single spectator in the form of a camera man precariously positioned on some scaffolding. 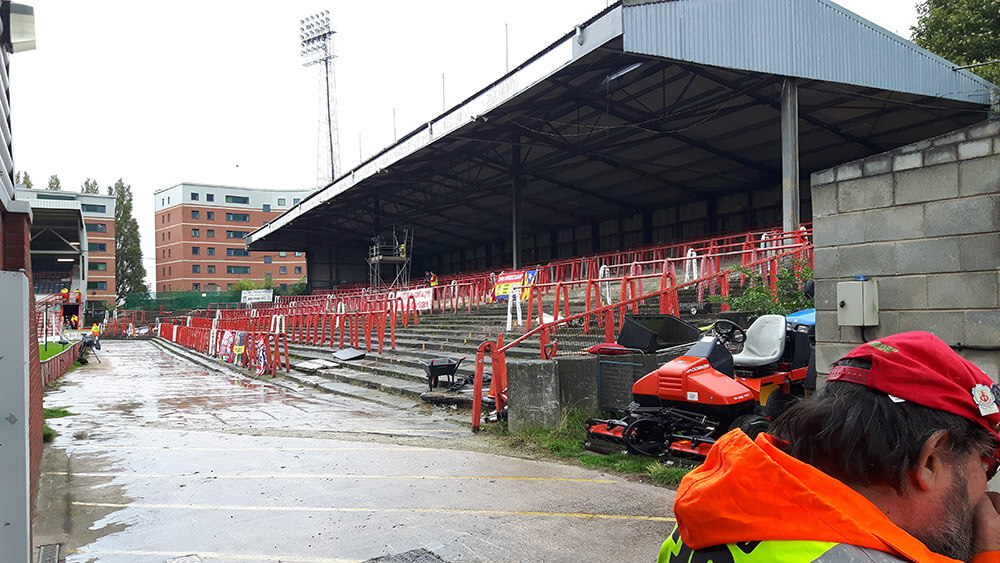 At the opposite end of the ground is the Glyndŵr University Stand, where the vocal section of the home supporters sit. With their drum and wind shields to the side of the stand it keeps the sound in the ground generating some decent noise.

Alongside one touchline is the Mold Road Stand. Bringing a modern tinge to the ground with its curved roof it is the newest part of the ground being built in 1999. Finally, there’s the Yale, which is where we were to be. Being a Southampton fan I had to go with the Eastleigh fans. 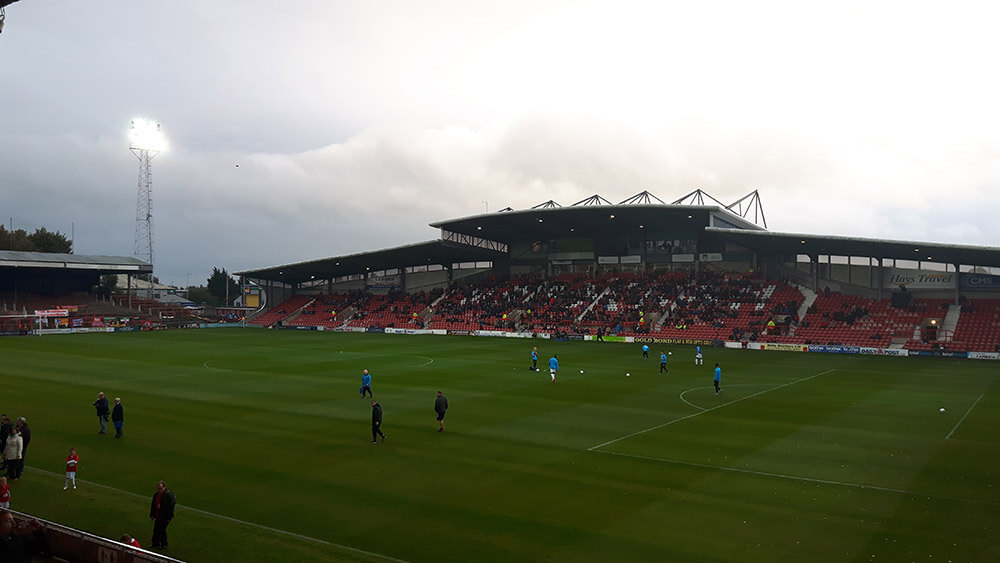 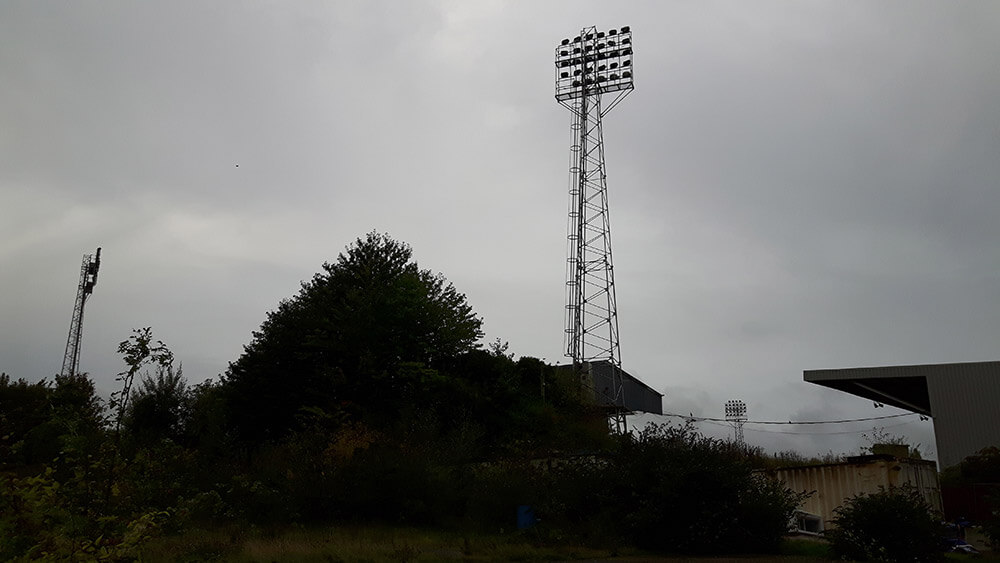 Floodlight fans won’t be disappointed at the Racecourse GRound

Thoughts on the game:

Looking at the stats prior to the game both sides averaged around a goal a game. The other end though was a different story, as was reflected in league position. Wrexham were sniffing around the play offs, their South Coast opponents hovering precariously near the drop zone.

There wasn’t much between the sides in the 1st half. Eastleigh had the best chance with home keeper Coddington pulling off a smart save from a fierce shot. They did go 1 better though as the interval approached. Former Coventry wide man Gary McSheffrey with a class low cross into the box which was met perfectly by Ben Williamson who slid home. 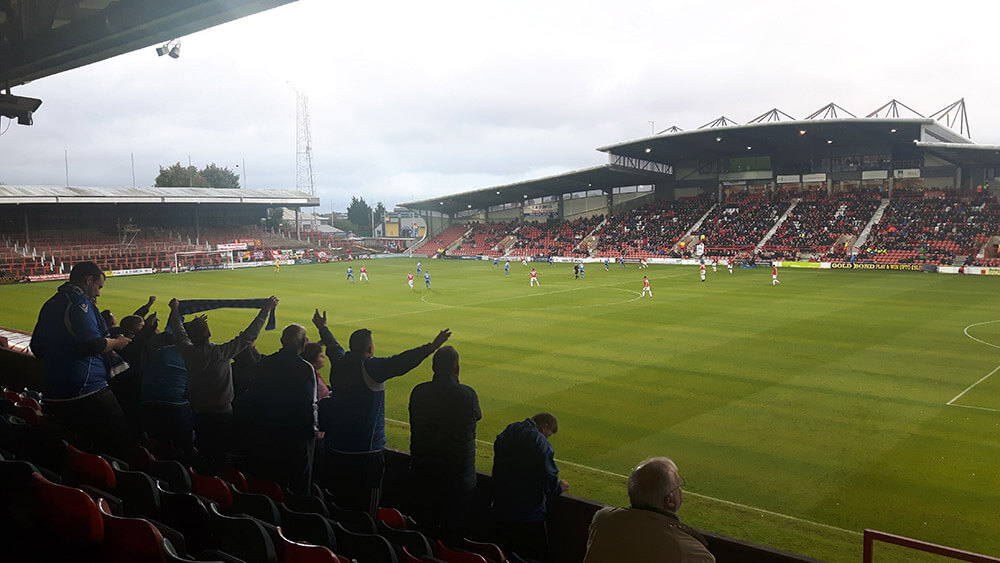 The Eastleigh fans in full voice

The second half was a different story though. Eastleigh couldn’t keep hold of the ball or get out of their half. As they dropped deeper, the Robins confidence grew, you could feel what was coming.

It was substitution that turned the game, but an Eastleigh one. Experienced front man Chris Zebroski of Bristol Rovers fame came onto replace McSheffrey. His first involvement was to let his man can free at a corner. That man was home skipper Shaun Pearson, who sent a bullet header past Ross Flitney in the away goal and didn’t break stride making his way back for the kick off. The tide had changed. 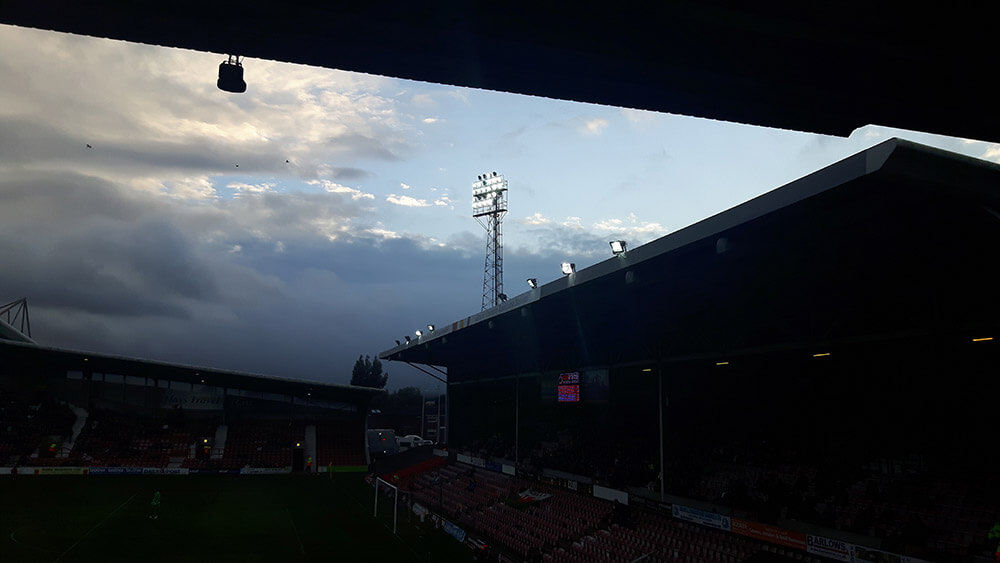 A few minutes later Zebroski was at it again. A needless foul, led to a free kick which started the passage of play from which Wrexham took the lead. There was an element of fortune as first the ball fell nicely in the box for Holroyd, then his shot took a deflection to send it past Flitney.

On reflection over the full 90 minutes 2-1 to Wrexham was about fair. Eastleigh played well in the first half and deserved the lead, but their lack of ambition and poor game management second half allowed the hosts back in. With a bit more bite up front I think there’s a real chance we could see the Racecourse Ground back in the 92.

For the Spitfires on the other hand it doesn’t look like we’ll be seeing the Silverlake Stadium in the 92 anytime soon. Despite having a number of recognisable names with league experience they aren’t a team…yet. 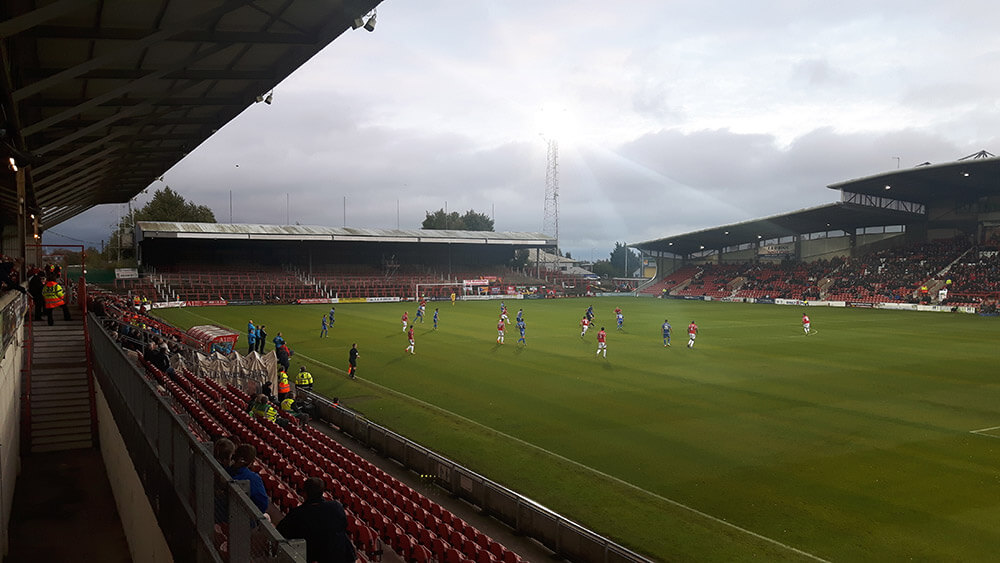 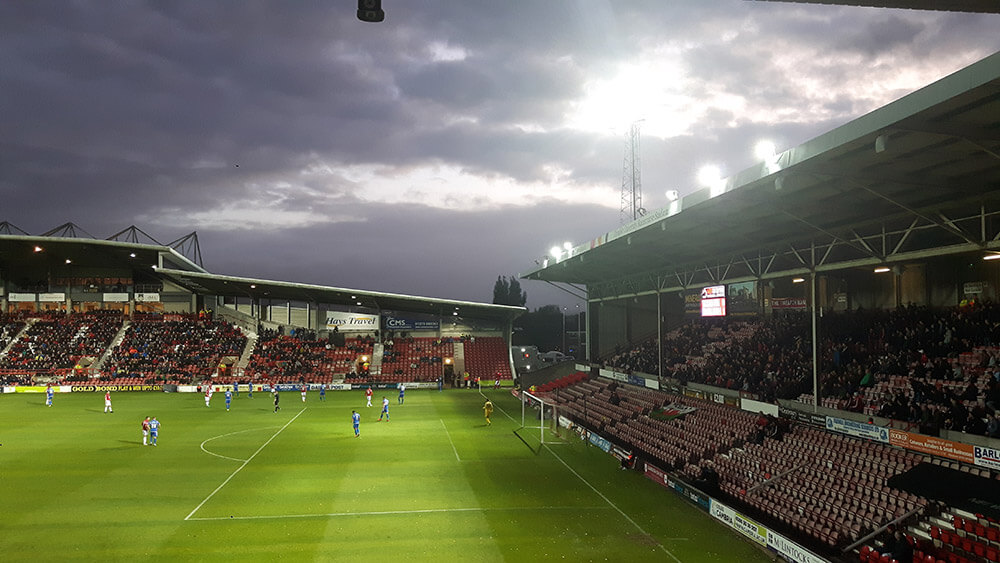 Atmosphere 3.5/5: The Racecourse Ground saw a crowd of 3907, with just the 46 away fans (well 44 plus the wife and I!), but the atmosphere was good throughout with some good back and forth between the sets of supporters. Both sets of fans had a drum which helped keep it going. It was a better atmosphere than I’ve experienced at some Championship grounds.

Location 4/5: Travelling by car it easy to get to with plenty of street parking and an easy get away.

Pint rating 3.5/5: Cold and wet Carlsberg. Points for being able to get a beer in the away end and a bonus of being amongst 46 fans there wasn’t a queue!

Programme 3/5: A decent read and a far cry from the memories I have of non-league programmes in my youth 15-20 years back. For the collectors amongst us there’s a great little programme shop, which is behind the Mold Road Stand, joined onto the pub ‘The Turf’. For me every ground should have one.

Character 4/5: A ground with personality with a mix of stands from different eras, if only the Kop was still in use.