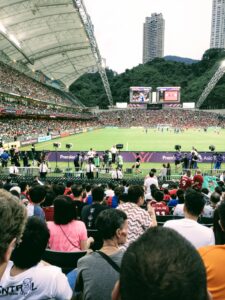 The sweltering heat of the day time at the Hong Kong Stadium.

The loss of a bet

It happens. I lost a bet. Therefore I was off for a preseason tournament, as the Premier League Asia Trophy was hosted in Hong Kong. The participating teams were West Brom, Crystal Palace, recent champions Leicester and a team, as a Manchester United fan, I hated from the centre of my heart, Liverpool. The debt to the bet was being paid in witnessing my footballing nemesis.

As I walked to the stadium, the build up of Liverpool shirts pulled knots in my stomach. Gerrard. Rush. Leonardson. Torres. All moving my afternoon food in the wrong direction.

I arrived early to see the first game, as the only winners of the Premier League in Hong Kong for the Premier Leauge Asia Trophy, Leicester competed with West Bromwich Albion. The Hong Kong Stadium’s 40,000 capacity was maybe two-thirds full. Later that evening, there stadium would be full. Crystal Palace would be playing Liverpool.

Within the ground, Liverpool supporters clubs from Dubai, Singapore and Thailand had banners hanging. I was at The Premier League Asia Trophy, a pre-season tournament, those at which I often scoffed at. They have their place in modern football, but I have little time for tours to the Far East, U.S.A and Australia. This wasn’t, in my condescending eyes, real football.

A humid sticky day in the pulsating afternoon heat meant the football on display was tepid and pedestrian. My evening attire was drenched in sweat, and I’d walked slowly to the stadium, so empathised with the players being asked to play in this.

Although slow, the technicality of the football was still high. The simple Cruyff turns in the middle, the darting run, a centre back chesting an interception to the holding midfielder. Ordinary stuff, but they all garnered loud cheers from a star struck crowd. 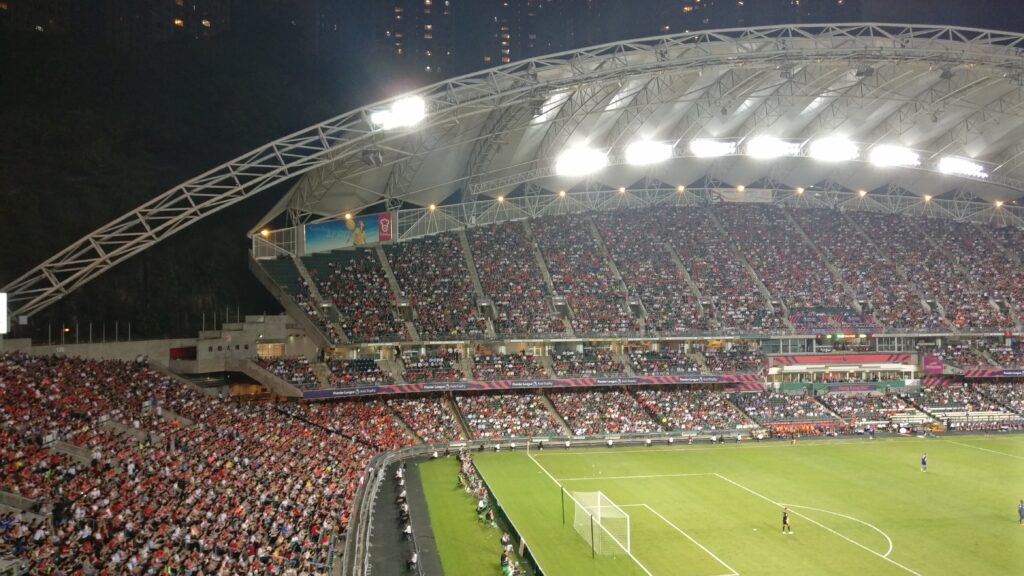 A sea of my least favoured red appreciating the Premier League Asia Trophy.

Jamie Vardy had a little party, and quite the reception, with a second half introduction and the smattering of Leicester fans, of which there were more than anticipated, arose for their Premier League winning hero.

After 90 mins, the scores were level at 1-1 after a Jay Rodriguez banger and a Riyad Mahrez fizzer. Then penalties. And the new style ABBA penalties. After West Brom’s Sam Field missed the target, Leicester really proved that the winner takes it all as they reached the final of the Premier League Asia Trophy. 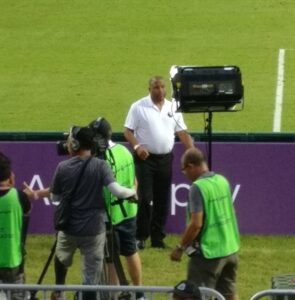 John Barnes in no shape to jinx down the wing. Probably too many chicken wings.

The entrance of my nemisis

The entrance of Liverpool was a fanfare I’ve never seen. A crazy pyrotechnic pitch display, the floodlights dimmed. The screams as the players emerged from the tunnel. The announcer going mad, the supporters matching the ferocity, but still not a bit on European standards. I think Crystal Palace just meandered on.

The quality of Klopp and his pressing game was impressive. The players disciplined with positioning and movement, whilst smart with possession. de Boer and his men struggled to retain the ball, Liverpool countered well with each turnover.

On the 21st Minute, a sudden rapturous applause took place, fans suddenly rising from their seats. It took a little time for me to understand, as I saw several shirts held high, the number 21 and Lucas emblasoned, as fans honoured their most recent longest serving player, as he had just departed for Lazio.

A late challenge by the Serbian Grujić on Zaha was met with disgust at the former United player, with boos ringing out. A scouse expat considered his solitary two appearances for United worthy enough for him to be deemed a ‘Dirty Manc steward of a bar’. I bit my tongue.

The jinxing run. The high raised extended leg to receive the 60-yard pass with a deft first touch. The clever footwork. Fairly rudimentary and expected in the Premier League. All received praise, and for players in Liverpool shirts, more so.

The occasion was Liverpool’s, and a goal a piece from recent arrival Solanke, from champions Chelsea, and Divock Origi, enough to seal a 2-0 win against a struggling Crystal Palace and a place in the final of the Premier League Asia Trophy. 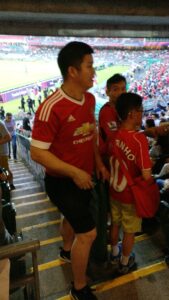 An ally, in an otherwise rather one-sided Liverpool love fest.

As I sat with thousands of fans singing their famous anthem at the end, I cringed. But I saw something else too.

Despite my indifference, something in me clicked. I was able to appreciate the football. It had been a while since I had seen a decent level live.

I thought back to my first Premier League game, and the deft touches of Cantona, the crunching style of Keane, or the nonchalance of Giggs, and being dumbstruck in awe of their ability.

The Premier League Asia Trophy is the marketing brainchild of the money makers at the Premier League. It is a preseason tournament in a South Eastern Asian country. To many, this is just a money-making exercise, but if you scratch a little below the surface, it is more than that to these fans.

Football, and especially the Premier League, has become a product. Whether we like it or not, it is here to stay. But as football fans who have access to regular high-quality football, even away from the Premier League, we should look at so called ‘plastics’ with a different lens. It might be British football, but it has become the benchmark for football fans globally and they want a piece of the action.

To the many thousands in this stadium, this was the first time they had seen their heroes. Although the atmosphere was nearly as damp as the humid air, their cheers and gasps were the admiration of the quality and the excitement to witness the players, only normally available via a screen, live for the first time. The teenager in them had been invoked!

I may have lost a bet, but I gained an interesting footballing insight. It might be a pre-season tour to a corner of the globe. However, it is also giving football and the global fan base, no matter which team, a chance to see quality football. A football gospel, if you will.