The achievement of doing the 92 can be completed in many ways. Some tackle it as a sprint, such as Ed Wood, aiming to complete the 92 (93) league grounds in a World Record Time. Sometimes it takes decades, such as with Southend United fan Andrew Leeder, author of the book “Roots to the 92” (get it, Roots, Roots Hall, home to Southend United, Roots to the 92…). In Andrew’s book, he details his experiences of the reaching 92 league grounds, confirming something all ground hoppers seem to love. The predictability of the unpredictable! We chatted to Andrew about his experiences and have a special three-part series to give you an insight into the book and Andrew.

How and where did the ground hopping all start for you? 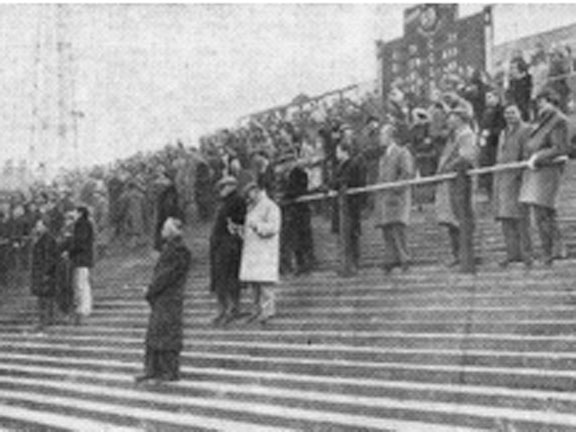 The old South Bank before it all got sold for housing.

At Roots Hall on 26 March 1971. Back then it was the newest ground in the Football League and indeed held that accolade for over 30 years until Scunthorpe moved into their shoe box in the late 80’s. Today it is slowly crumbling as the club continue to strive for a new ground to follow the herd, a goal with (as yet no end in sight) that has been rumbling on for a couple of decades now. Meanwhile, Roots Hall is held together by sticking plaster to maintain minimum compliance with ground regulations, and though clearly deficient in so many ways it seems to exude a certain charm that modern stadia lack.

Southend certainly wasn’t my first choice. Back at the start of the 70’s in Essex, Chelsea or West Ham were the ‘teams to be with’, but Roots Hall was local and cheap so my Dad took me along with a milk crate to stand on so I could see over the perimeter wall (now on those rare terrace days anyone daft enough to stand behind me could do with a milk crate to see). My first game was a ‘Friday nighter’ and the place under lights mixed with the smell of stale burgers and woodbine was evocative. Once in I was hooked. We also back then had Billy Best up front – what better name has there ever been in football for a young kid to have as his goal scoring hero?

What was the sacred 92nd ground you visited to join the club and how did you mark the occasion?

Bloomfield Road, on 2 April 2016. I wanted the 92nd to be with my team (Southend) and also ‘decent’ i.e. not one of the ‘it’s all we can afford’ modern concrete blobs that are now starting to spring up all over the lower leagues. Being Blackpool it was also a good place for a bit of a celebration, so 14 of us (mostly from Suffolk/Essex) made our way up to the resort to make a weekender of it, all of whom I had been to matches with over the years and two who I had not seen for over 30 years. 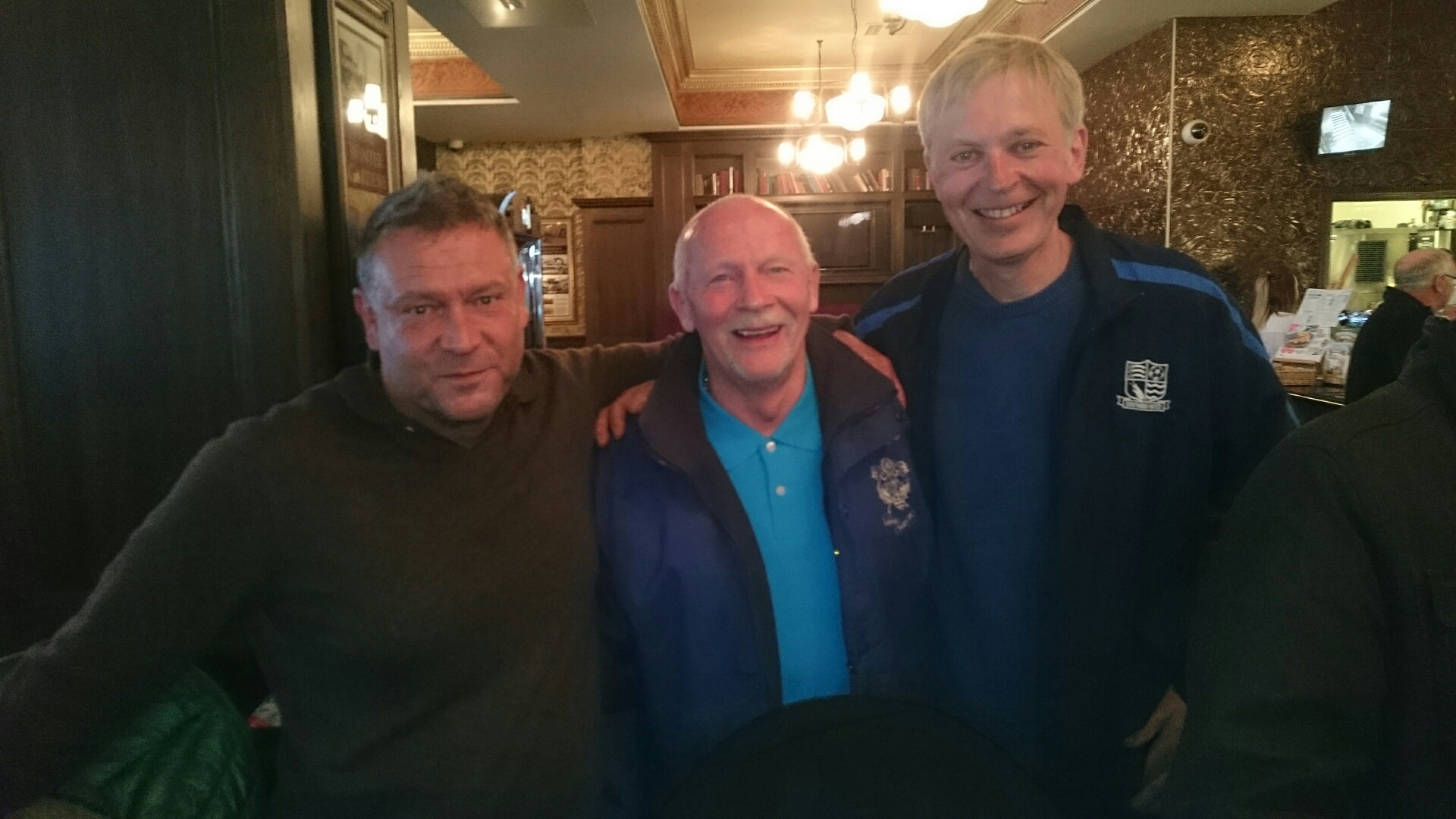 Andrew (right), his mate Harvey (left) with Derek Spence, former Southend United and Northern Ireland international, who did the foreword for the book, in the middle, when Andrew meet up in a pub before Andrew’s 92nd game at Blackpool in April 2016.

Scrolling back a bit, at the end of the 1980/81 season I had been at Plainmoor to see Southend clinch promotion and had helped to chair our Northern Ireland international striker Derek Spence off the pitch at the end of the match. Now, I knew Derek was still involved in the game at Blackpool so contacted the Tangerines to see if a meet-up could be arranged. Derek, like the top bloke he is, turned up at our meeting pub on the Friday before the game and we had an enjoyable time reminiscing over a couple of pints – he could not recall me chairing him off the pitch some 35 years before but did agree to write a Foreword for my book, and we are now planning for him to come back to Roots Hall for the first time since he left the club for a small reunion of some of the 80/81 squad.

As most of us know, Blackpool is sadly a club in turmoil and I sympathise with their fans who are boycotting games. That said, their club still did us proudly on the day, as we took advantage of an excellent value hospitality deal where the service and facilities were excellent. Southend sadly failed to turn up on the pitch that day, but it did not detract from a great weekend, as we celebrated with plenty of good food and drink which in many ways for me typified what going to the match is all about, namely it’s more than just 90 minutes.

With the title of your book, it’s obvious Roots Hall was the first to be completed, but what was the second ground you got to?

Yes, ‘Roots To The 92’ was a name that just seemed to present itself as the obvious tongue in cheek choice. Had I ended up supporting Chelsea, I suppose some reference to ‘Bridges’ would have worked equally as well, and Stamford Bridge was my second football home to visit. 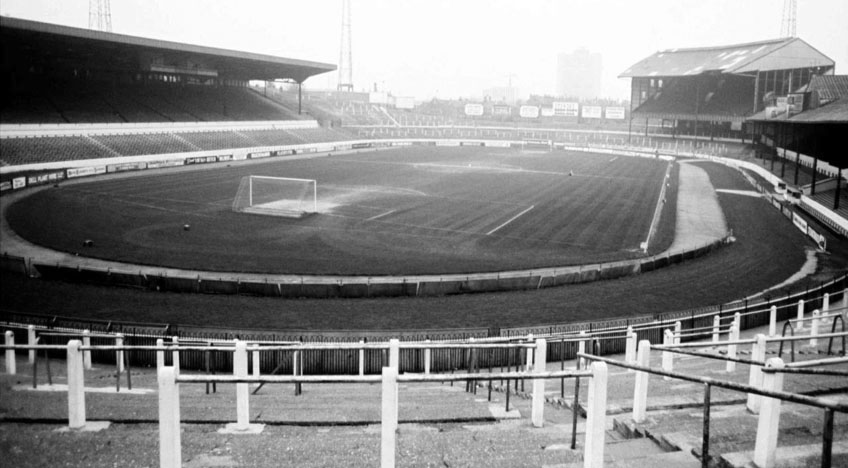 A golden Oldie of Stamford Bridge, from circa 1970.

It was where I had wanted to be at the start, but after a few months of sampling Roots Hall, Dad decided that I was sufficiently hooked to the cheaper option and took me along to see Chelsea v Wolves. The team sheets that day, from 1 to 11 on both sides, mostly a list of icons that most fans of that era can probably recall with far more ease than the teams of today. Stamford Bridge was a wonder to behold – the place was packed. Old stands dominated, including an odd two-tiered affair between the old East Stand and the open-ended away terrace. It looked as if it could fall down (and it had to be demolished not long after our visit). We had seats (a new experience at the time) and such luxury afforded great views of crowd surges at the Shed End. I wondered how the kids there would ever recover their milk crates.

When visiting grounds I often like to take a stroll around the surrounding area, unlike many of the prefabricated out-of-town grounds. At Chelsea, you are spoilt for choice for things to do and see. A favourite is to get off at Earls Court, avoiding the scrum at Fulham Broadway, and walk to the ground through the home of the dead at Brompton Cemetery. The Victorian Mausolea mark in ornate grandeur the final resting place of some 200,000 souls, and it is spooky beyond belief. If you like scary thrills, it’s far better than paying a score to some student with a fake cockney accent and scar to rattle a chain at you at the London Dungeons.

What was your favourite ground?

It is difficult to say there is one true favourite that stands above the rest. Roots Hall is certainly the place I love, but I recognise it has faults by the bucket load and a casual visitor could quite easily be turned off by its outdated facilities and adverts warning of the dangers of catching chlamydia. 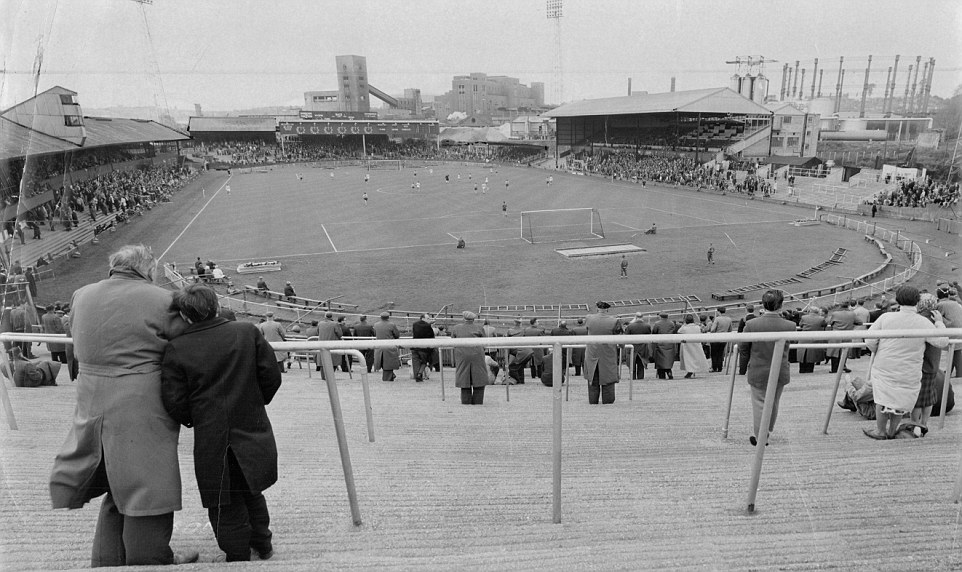 No longer with us, but this beautiful old stadium was home to Bristol Rovers until 1986.

From days gone by, Highbury is certainly up there. My first visit to Arsenal’s historical old home was back in ’81 with 57,000 others to see a classic, as Villa won the title despite losing the game 2-0. The sight of 20,000 Villans jumping up and down at the Clock End as radio messages relayed news of Middlesboro coming back to beat Ipswich to stop the Tractor Boys winning the title was an atmosphere to savour.

Lower down the food chain, I always loved going to Layer Road – Colchester’s old ground was a shambles but the atmosphere it created was terrific, and bouncing up and down on the wooden planks that formed the away terrace was always a joy.

Of the modern generation of grounds then, Brighton’s Amex is superb – it even has it’s own memorial ground to give fans that ‘from cradle to grave’ journey.

But if I was to name one place then it would have to be Eastville, home of Bristol Rovers until they had to up-sticks to Bath in 1986. I lived in Bristol for four years in the mid-’80’s and many a time went along to Rovers old stomping ground simply because I found it a mesmeric hotch-potch. Catering for greyhound racing and speedway too, the stands were all uniquely different, catering for the scoring systems of the different sports in a bowl which was far too big for any of them, and with distracted M32 drivers starring in on one side and an ugly giant gas holder dominating the opposite boundary. There was then the idiosyncratic sight on the boundary of the speedway track of flower beds, as if the groundsman thought that the sight of a few marigolds would help transform the arena into something delightful. Well, it was beautiful, but only in the eyes of a Gas Head or a ground hopper.

Thanks to Andrew for taking the time out to speak to us. “Roots to the 92” is available direct from the publisher Completely Novel (paperback only), or from Amazon (Kindle version or paperback). To find out more about Andrew and his journey to join the 92 club head to his website, Facebook page and Twitter. Be sure to watch out for parts 2 and 3 of our interview with Andrew which are coming soon and don’t forget to enter our Twitter Giveaway to have a chance to win a copy of “Roots To The 92”!