We aren’t talking the swaying terraces of the seventies, we are talking talking safe standing. This is tried and tested on the continent and has worked extremely well. In Germany the Westfalenstadion, the home of Borussia Dortmund has the largest free-standing Grandstand in the world with a massive 25,000 safe standing capacity. 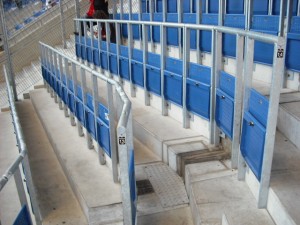 The Football Supporters Federation explains how it works “Rail seats incorporate a safety barrier and a flip-down seat on every other row (or step). These seats can be locked in an upright position for domestic games, allowing two rows of supporters to stand in between barriers. Supporters can thus be given a designated ‘seat’ (or standing plot) but watch the game while standing. With only two rows of fan per barrier there is no danger of a crush or progressive crowd collapse, and this technology facilitates the inclusion of up to 80% more supporters than a seated area of similar size.”

Taken from the FSF website, the mission and how to get involved:

“The FSF’s Safe Standing Campaign is supported by Aston Villa, Peterborough United, the Safe Standing Roadshow and Stand Up Sit Down.

AIMS: To persuade the Government, football authorities and football clubs to accept the case for introducing, on a trial basis, limited sections of standing areas at selected grounds in the stadiums of Premier League and Championship football clubs. 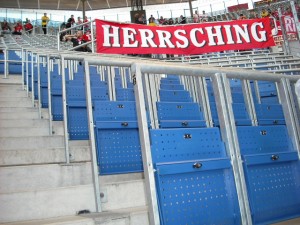 The FSF needs all fans to help. What can you do?

Step 2 – Email your MP from this link, or visit their office, and ask them to sign Roger Godsiff’s Safe Standing EDM 573…

Step 3 – Let us know what response you get via safestanding@fsf.org.uk. We want to see which MPs sign the EDM and will follow up those who don’t.

Step 4 – Spread the word. Send this page to your mates via email, Facebook, Twitter or whatever other social media the cool kids use nowadays. If you’re involved with a supporters’ organisation, fanzine or website use your links to promote this page.

Want to do more? Contact the FSF. In the coming weeks we expect to see a great deal more activity and need volunteers who are willing to commit time and fight for the cause. Email: safestanding@fsf.org.uk”

For all your questions answered head to http://www.fsf.org.uk/campaigns/safestanding/index.php

Thanks to the FSF, Michael and Jon for use of content and images.