the92.net blogger and budding press snapper Dan White made his way to the Emirates stadium for a prize international friendly as Brazil continued their World Cup rebuilding against Chile.

Thoughts on the ground:
Getting tickets for an Arsenal game was a challenge. Trying to log on to the website, I found out you had to pay a membership fee just so you can get tickets before general release. This seems a bit steep especially considering how much they charge for tickets as it is.

In the end I got lucky finding the Brazil vs. Chile game on general release for £30 to avoid paying for membership. The website advertised this game as Neymar vs. Sanchez and this was my first ever International football game so I was really looking forward to it. When I told my friends on Facebook that I bought tickets to this game, one of my mates, Chris, said “What an odd game for Arsenal to have”. I was a little confused by his comments but I think what he meant was “Why are Brazil playing a friendly in England rather than in Brazil?” I didn’t care because I get to see Brazil and Chile. When I looked at both squads and who played at the 2014 World Cup just to see who I could potentially see. Brazil had the likes of Neymar (Barcelona), Phillipe Coutinho (Liverpool), Thiago Silva (PSG) and many others. Chile has Alexis Sanchez (Arsenal), Arturo Vidal (Juventus), Gary Medel (Inter Milan) and many others. How could I not be excited? 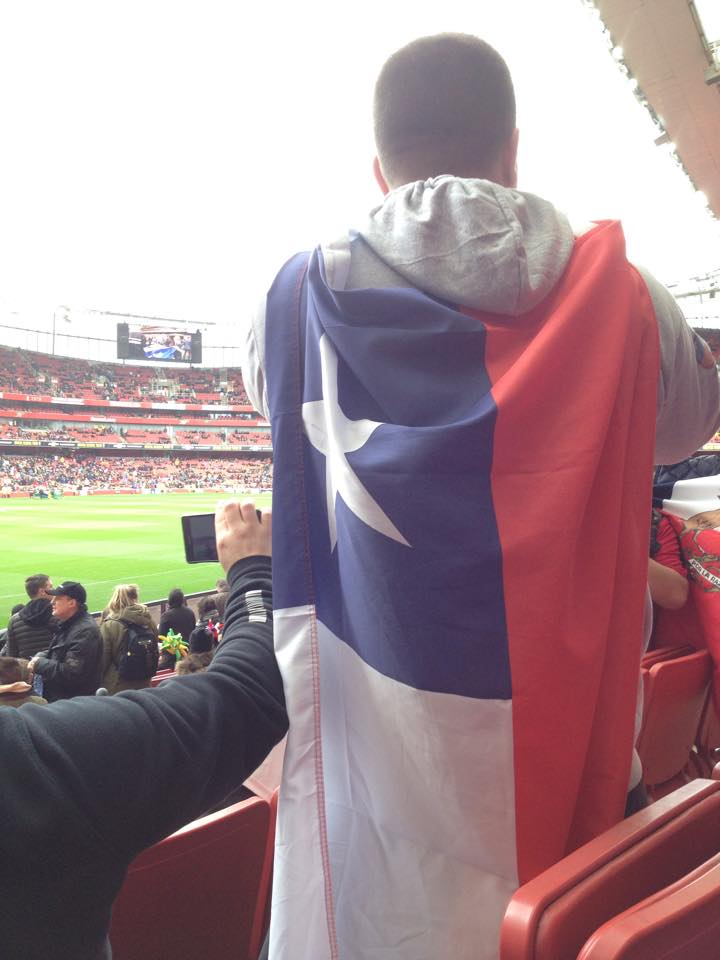 Getting to London was a nightmare. My coach arrived, but when I boarded I found that the toilet was blocked. That was the least of my problems as the rain caused the coach roof to leak. You can imagine how people felt when they are trying to get some sleep and they are woken up by rain landing on their heads. We pulled over at a service station near Leicester Forest to find that the coach had a flat tyre! We drove nearly 100 miles on a flat tyre. At least I had some company with me, as at the service station were fans of North Ferriby United who were also on their way to London to play in the FA Trophy finals against Wrexham at Wembley Stadium.

They all looked excited to be in a cup final and to get the chance to visit Wembley. Thankfully, a replacement coach came…. for those who had connections only! I panicked and said I had a train connection to Portsmouth to catch. They didn’t know that but they believed me. If I had not made up that lie, I would have had to wait an extra hour or so just for a replacement coach. But because I took the connection coach, I only had to wait 10 minutes. At least National Express was nice enough to send me a Tweet apologising for everything. 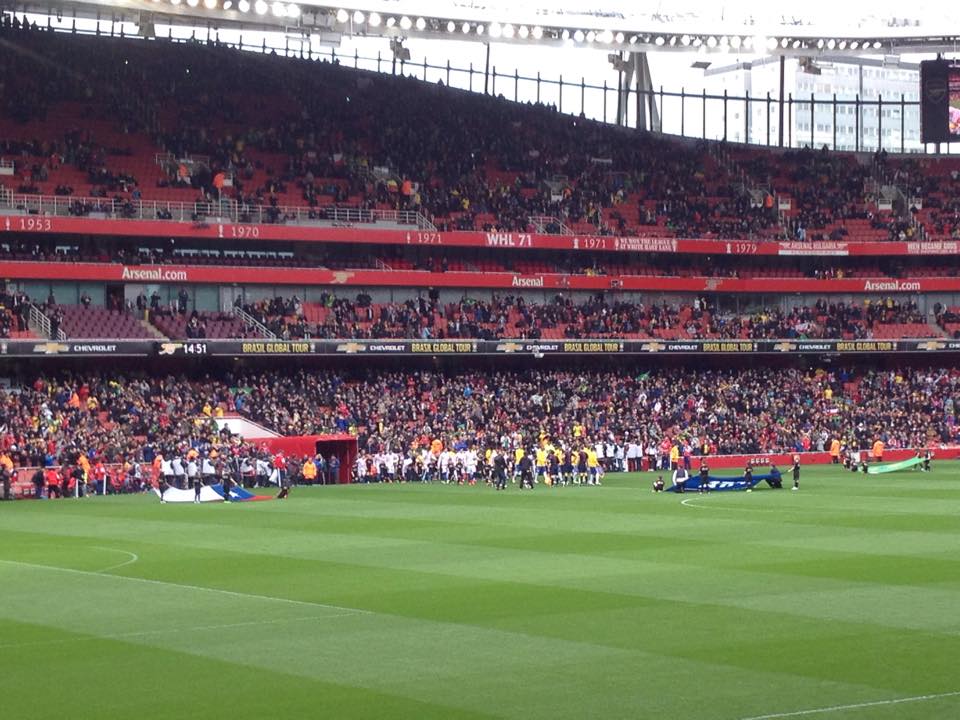 I arrived at the Emirates and I couldn’t help but notice how many fans from both teams had travelled all the way from either Brazil or Chile for the game. When I went to the England U17 game vs. Slovenia in my last blog, I noted that only 19 Slovenians came to the game. But this time they were a lot more than that. They were even fans who had travelled from the likes of America, Egypt and Ecuador. Then you have people like me who do live in England and came from places such as Leeds, Newcastle, London and Plymouth. If you thought Arsenal’s ticket prices were expensive, then you don’t know how much they charge for everything else. Programmes cost £5 and they charged £7.80 for a hot dog and a Pepsi! Take a tip from me if you’re planning on visiting the Emirates; visit the sweet tent as he only charges £1 for two bags of sweets.

Entering the ground, fans were already singing and chanting and were probably more excited than I was. One thing I did like about the Emirates was that their seats were padded. And they were comfy to sit in. While taking in the atmosphere, they were a few fans who had brought selfie-sticks with them but security were quick to take them away and almost threw them in the bin. I didn’t want to risk taking any photos with my camera in case they took it. 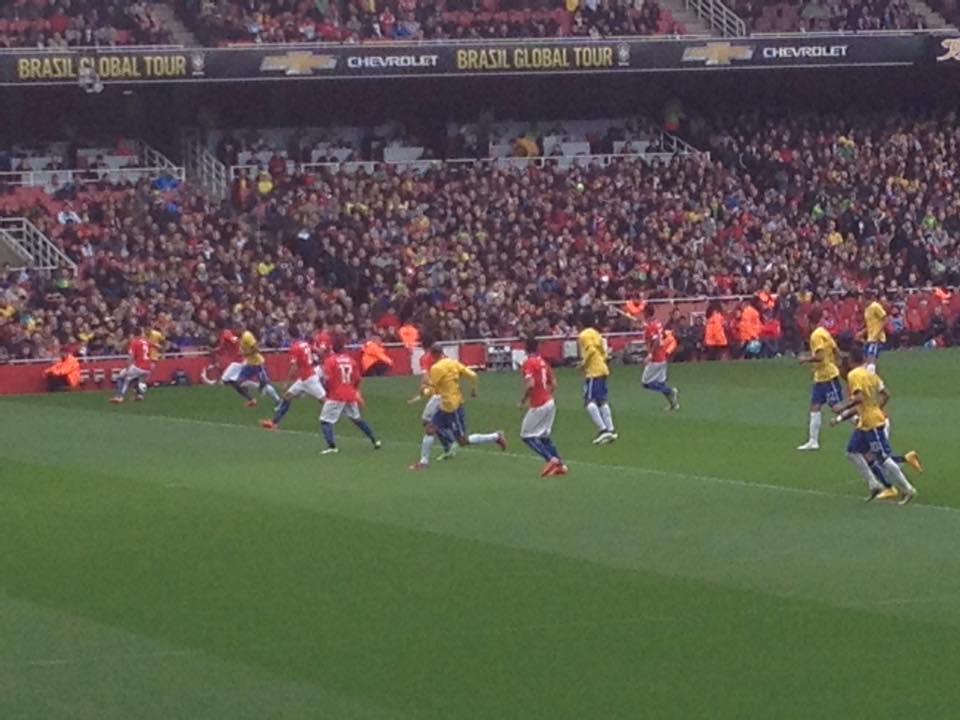 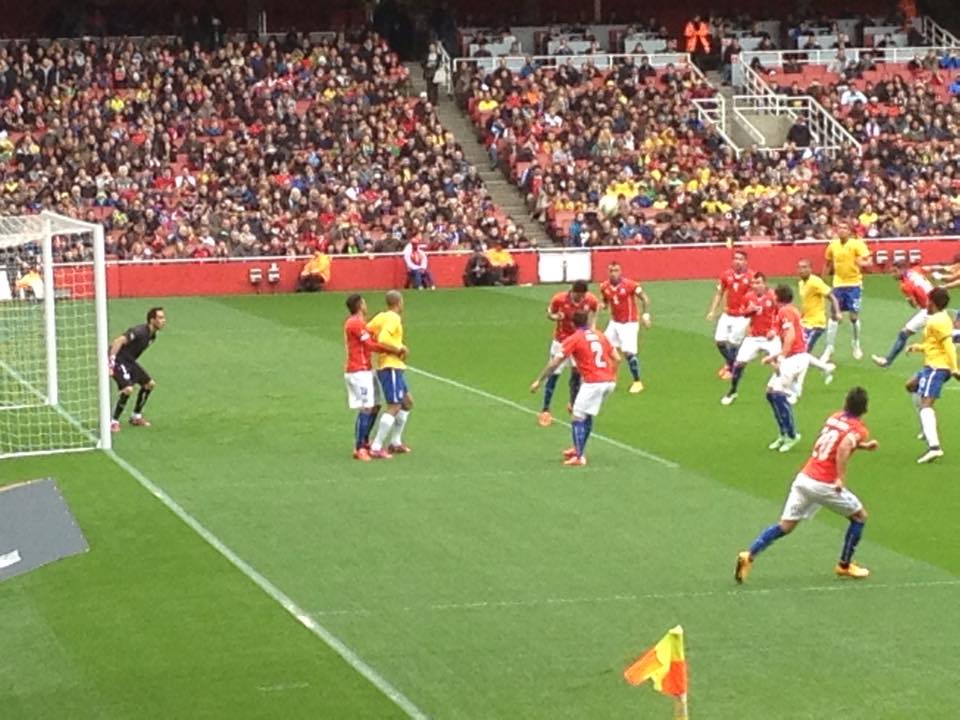 Thoughts on the game:
When the game started, fans were really excited but when the first half started, they realised that the game wasn’t interesting unless you really like seeing Neymar fall to the floor anytime anyone came near him. So how did fans entertain themselves?… by doing a Mexican wave! This was the first Mexican wave I had seen in all of the grounds I had visited. Seeing 60000 people doing a Mexican wave must have looked really cool to watch on TV.

During half-time, I had a chat with a few Chilean fans who told me how far they had travelled and how they nearly missed the game as their original flight was cancelled and the replacement flight was delayed. But I was glad they made it as they were very nice to speak to them. They must have liked me as they made me an honorary Chilean and was welcome to visit their country at any time. They even gave me a free beer! This I liked as beers were £4.50 for a pint.

The second half started and just like the first half, nothing happened. But after 72 minutes, Hoffenheim’s Roberto Firmino scored the only goal of the game by tricking the keeper to dive the wrong way. Another thing that’s worth noting was that the referee didn’t spot Gary Medel apparently stomp on Neymar after tackling him. This did lead to a few Brazilians calling Medel “The Chilean Joey Barton”.
Overall, I really enjoyed my time in London. The only thing I would recommend if you are planning on visiting the ground is to bring a lot of money with you because everything is so expensive. Also, don’t ride in coaches with flat tyres, leaky roofs and clogged toilets.

Location 3/5: Has its own London Underground stop (Arsenal)

Character 3.5/5: Chanting hours prior to kickoff, Mexican waves and air horns! LOTS OF THEM!!!

Stewarding 3/5: They were nice to me but hated anyone taking pics during game and selfie sticks owners