Pools fan Ross Hamilton-Milburn makes the trip from East to West as Hartlepool look to claw back points in the League 2 relegation battle at Morecambe.

Thoughts on the Ground
The walk to the ground from the railway station is perhaps one of the dullest in the football league. I’d never been to Morecambe before and I imagined to it to be a picturesque, quaint seaside town like Whitby or Scarborough. I thought wrong. Morecambe seems to be built on a New York style grid system but that’s where the similarities end. The walk from the station to the ground is just around half an hour and that’s plenty time enough to see the sights of the town. What I saw on the way were ‘seaside’ holiday camps a mile and a half inland, local youths on bikes outside corner shops having a go at us away fans and then finally a deceivingly small football ground. Seeing photo’s of the ground prior to my travel I was led to believe it was a well built modern lower league football ground similar to perhaps Burton Albion, especially given the title ‘arena’ in the name.

The ground is made up of one large stand that runs the length of the pitch, basically a toilet block and a food kiosk on the opposite side, a half full home terrace behind one of the goals and a closed off away terrace behind the other goal. The away support was housed in the large stand and visibility was good, with clear undisturbed views of the whole pitch. Why the away fans weren’t in the actual away stand I do not know but that’s Morecambe’s issue. 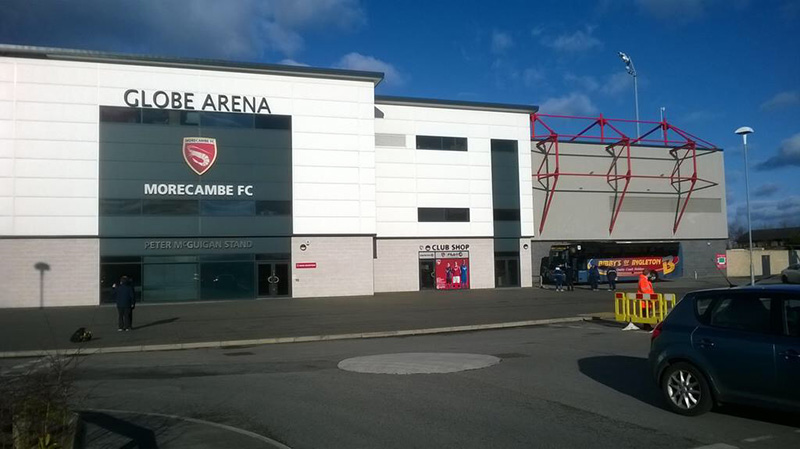 Thoughts on the Game
Actually seeing Hartlepool win was a major plus for me, the first time I’d witnessed a Pools win all season. Morecambe are a solid mid-table outfit who are unlikely to trouble either the promotion or the relegation places this season and their performance reflected that. Hartlepool on the other hand were a determined, motivated side battling hard against relegation and were rewarded with a goal mid-way through the second half courtesy of an own-goal from Morecambe defender Andy Parrish after good work from Hartlepool’s on-loan striker Ryan Bird.

Later in the second half Morecambe went on the offensive and were unlucky not to score after a succession of close attempts on goal but Hartlepool’s hero of the day (not for the first time this season) was Scott Flinders who stopped everything the shrimps could throw at him. Pools held on and secured a first away win of 2015. 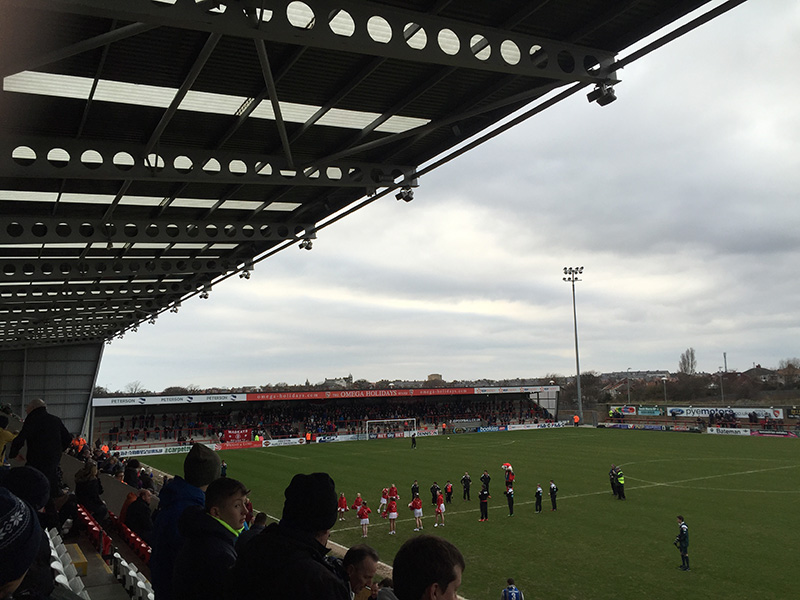 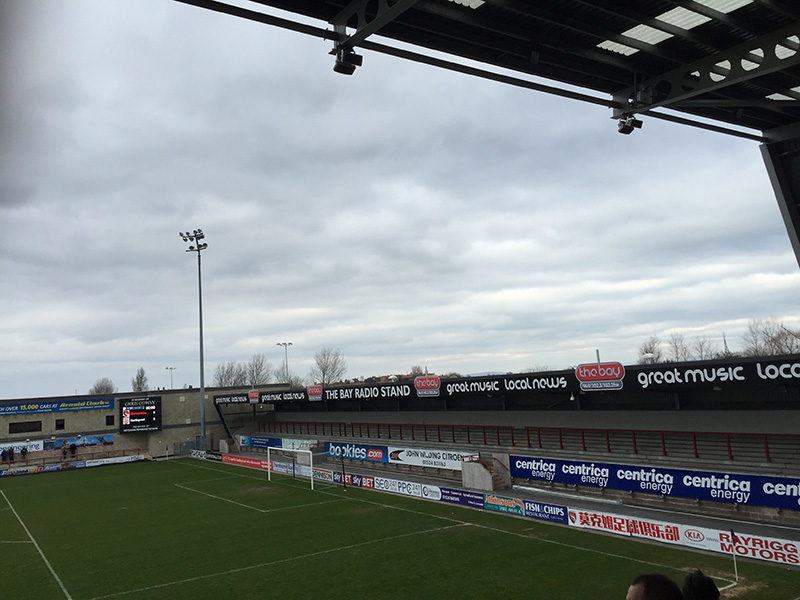 Atmosphere
It’s difficult to maintain a vocal crowd when theres barely a thousand home fans in a fairly vast stadium. Morecambe has one of the lowest average attendances in the football league and the cheering from the home end reflected that. The away support from Hartlepool was fairly rowdy which provoked an extreme response from the stewards. During the first match around 5 stewards were in charge of managing the away fans and it was clear very early on that they weren’t up to the task. Midway through the halftime break the police were called in and essentially did the stewards job for them. One of the police officers was holding a camcorder and spent the game filming the fans. After the game walking out of the ground I walked past multiple police vans, around a dozen police and even a dogs unit. It was concerning to say the least. 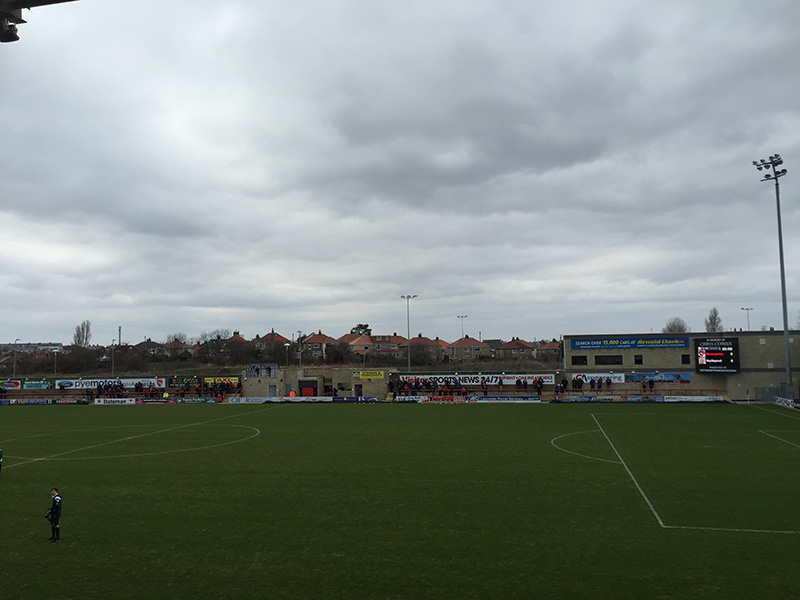 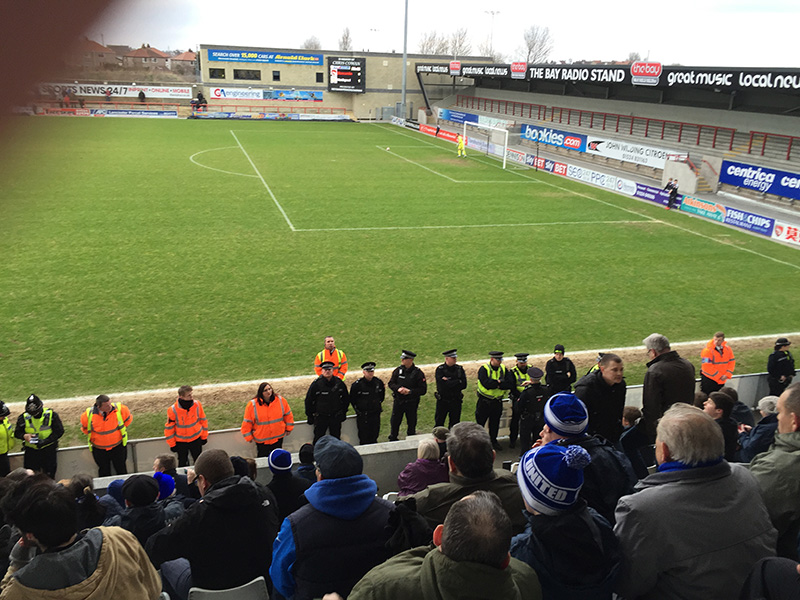 Location
Although the ground is not in a nice location, it is very accessible with plenty of street parking and not too far away from the train station.

Value for Money
£6 for a concessions ticket, you can’t argue with that. Adult tickets were £21 which is very steep considering the league we are in but you’ve got to love that student discount.

Pie and Pint
This was the part I was most looking forward to. Morecambe pies have been ranked the best in the football league and have also reportedly been sold in Harrods Department Store. When I walked up to the server at the kiosk and asked for a pie, I didn’t even have a choice of flavour I was just handed one. Much like Hartlepool’s defence this season the pie had a very crumbly base that split very early on. In terms of taste it was fairly standard but I felt let down because I had expected so much more.

Programme
£3 is a reasonable price to pay for a fairly good match programme. My only major concern is that they had ranked Jonathan Franks as one of Hartlepool’s key players. The teamsheet also wasn’t on the back page of the programme but a few pages from the back. It’s a minor gripe I know but it breaks the sacred tradition of match programmes that the squad list is on the back page.

Overall
It was a good day out but nothing out of the ordinary (except the police presence). It was just a samey experience with nothing inventive or different from any other ground.

You can keep up with Ross and his journey doing the 92 league grounds on Twitter @RossHamMil and on his the92.net profile here. Have you ticked the Globe Arena off your 92? Add it to your list here www.the92.net/ground/globe-arena or plan your visit using our away day planner here www.the92.net/plan-your-away-day/globe-arena.