Thoughts on the ground:
I had earmarked the weekend of the 26th/27th to tick a couple of new grounds off my 92. With Middlesbrough’s clash with Leeds at the Riverside on the Sunday and Forest’s trip to Huddersfield on the Saturday completing the double – however my plans were scuppered by the latter being moved forward 48 hours for Sky, which I found ridiculous. I can understand the appeal of a live game on a Friday night, but on Thursday night, a ‘school night’ is certainly not a decision which had been taken with the fans in mind. Working near Mansfield though I was already part of the way on the trip to Yorkshire from home. My original thoughts turned to delight as the opportunity of ticking off 3 new grounds in 4 days became apparent, with the change allowing a visit to Turf Moor on the Saturday. To steal an Alan Partridge phrase… ‘Jurassic Park!’

The journey to Huddersfield was pretty painless, although took longer than it should have due to large stretches of 50 mph average speed limits on the M1. Thanks to the beauty of Google Maps on encountering some traffic entering the town I was redirected on some old narrow winding back roads through the houses to the stadium. Carrying on just under a mile past the ground off Old Leeds Road was some pay and display street parking, but being only operational up to 6pm provided a handy free spot to park up as opposed to the £7 to park at the stadium. 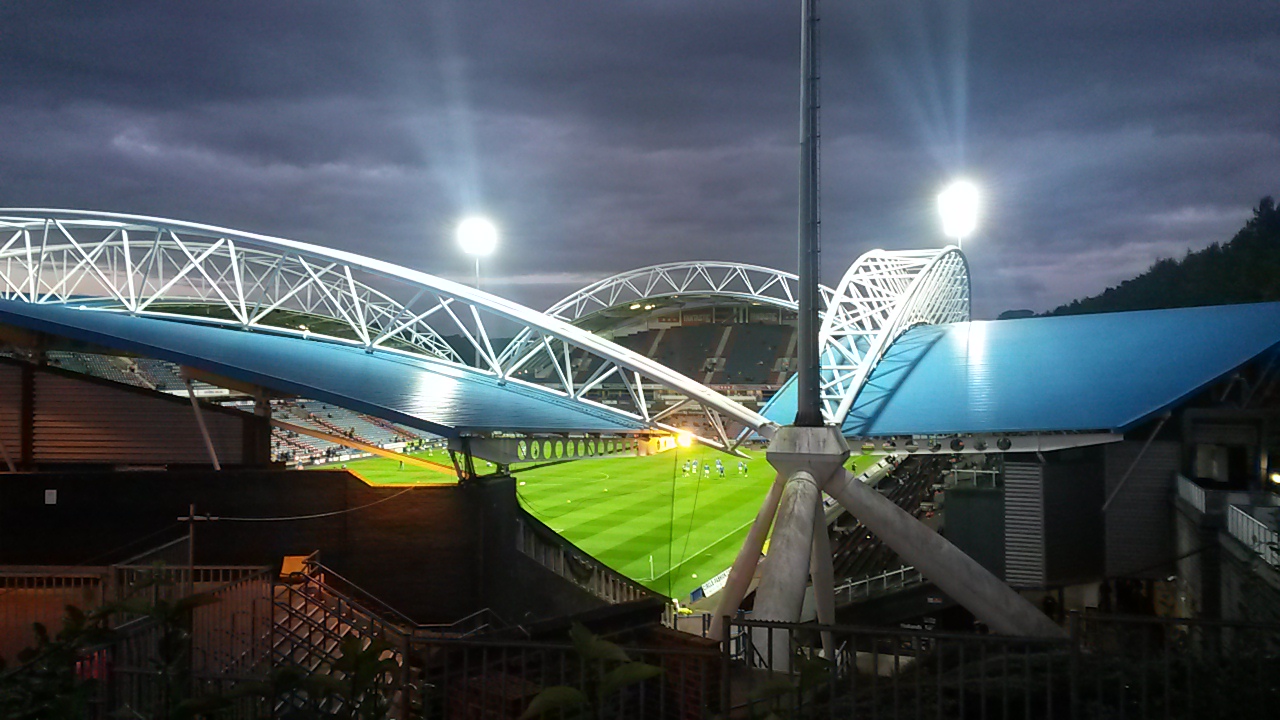 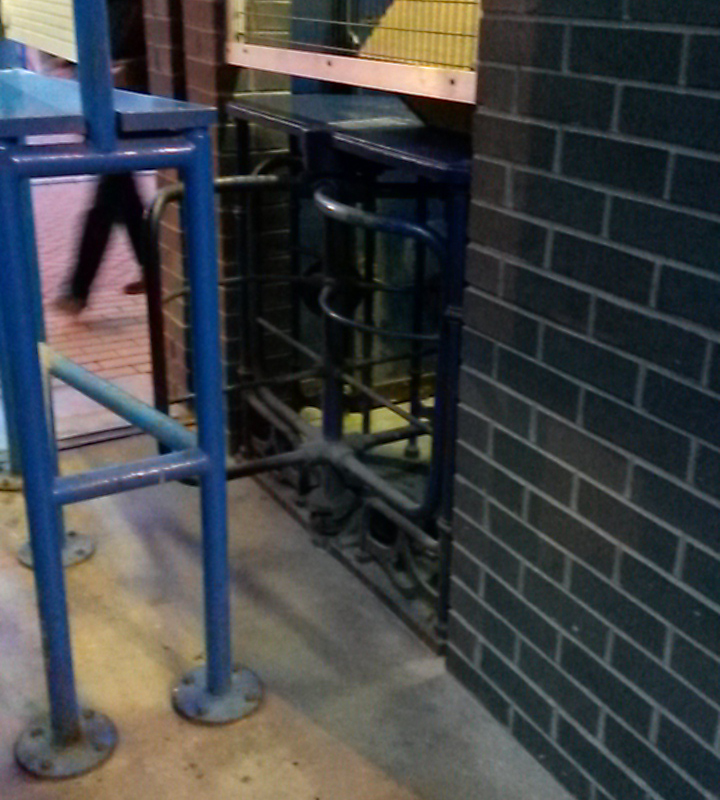 The John Smith’s Stadium is particularly impressive. The architecture of the ground really is striking from the bold floodlight stanchions to the arches that shape and adorn the roof of each stand. Looking at the arches they do remind me of Wembley, could the original McAlpine Stadium have been an influence on our National ground? Now I did think this might come under fire as a ridiculous statement – but thanks to the ocean of knowledge that is Wikipedia I discovered that the ground was designed by the same company that did Wembley, HOK Sport, so that could well have been the case! The ground was one of the first in a generation of new build stadia and has really stood the test of time. Now over 20 years old it shows no sign of appearing dated.

Being someone who is easily pleased I did like the turnstiles. As it is a modern stadium and with having attendants scanning barcodes on tickets, the actual turnstile itself you walked through was like the old style ones which I love seeing. Did these come from the old Leeds Road ? – can Terriers fan shed any light on this? Finally I’m pretty sure it’s the first time i’ve seen a Johnny machine in the gents at a Football Ground, perhaps the locals get particularly excited or perhaps this is for the Rugby League fans?! Again Town fans drop us a tweet if you know…

Thoughts on the game:
Despite their mid-table positions both sides came into the game in good form. Huddersfield had produced back-to-back victories and Forest despite narrowly losing their previous home game had performed very well, before which had recorded 2 wins on the road. The first half struggled to get going – Town had a fair amount of possession but found the away side difficult to break down. You could see how they had picked up 3 points from their last 2 trips away from the City Ground. When the Terriers did get into promising areas the final ball seemed to be delivered too late or the wrong option chosen, Mustapha Carayol particularly wasteful in my opinion. 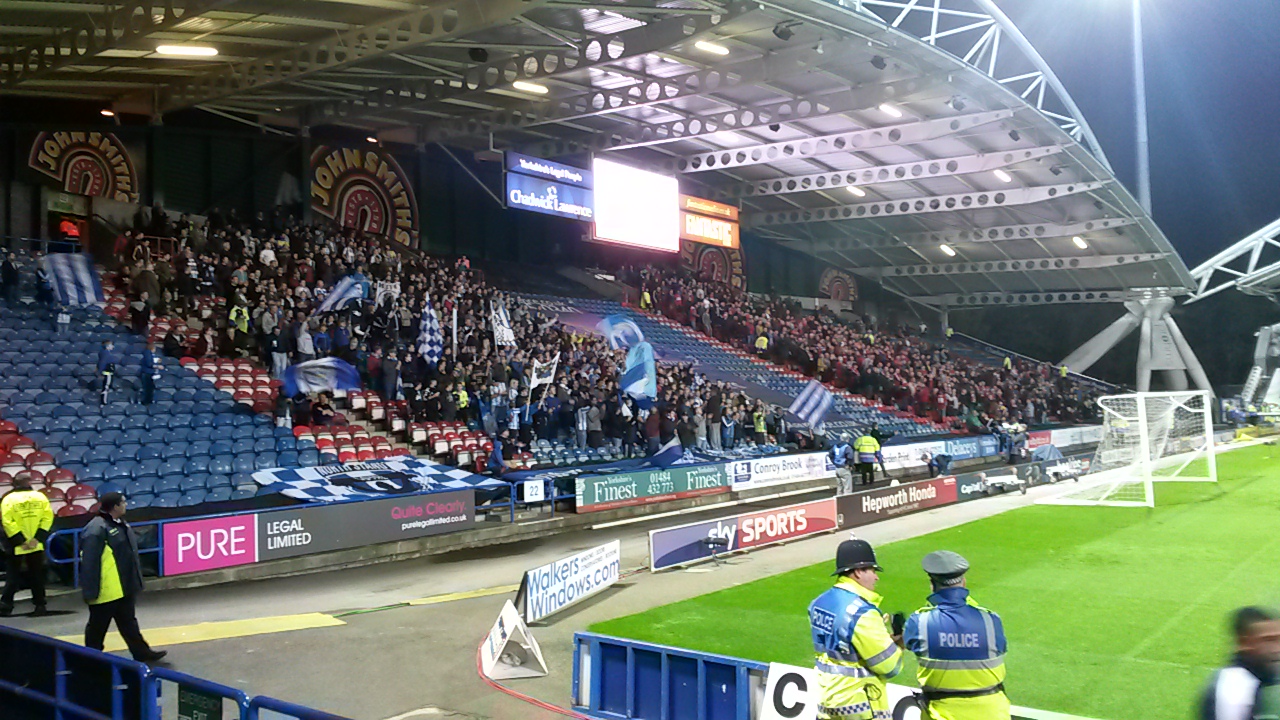 Forest grabbed the lead midway through the half with their first meaningful attack. Left back Daniel Pinillos got to the byline and crossed, for Eric Lichaj to sneak in at the far post behind Carayol to head back across goal for Mendes who was arriving late to smash into the roof of the net from 12 yards. After the break again the home side were seeing plenty of the ball but clear cut chances were few and far between as a the Tricky Trees looked solid in defence. Although against the powerhouse of Ishmael Miller, the definition of a ‘Champ Man 4’, they were rarely troubled. Huddersfield didn’t give up though and had their first real opening when Harry Bunn hit a neat volley from a right wing cross that Kelvin Wilson managed to get his head on to deflect away.

The Tricky Trees could and should have put the tie to bed with 12 minutes left on the clock. David Vaughan released substitute Chris Burke, who despite the home fans calls had arched his run perfectly. With the keeper to beat the wingers dinked finished came back off the post to the advancing O’Grady, whose lashed shot from the edge of the area was superbly blocked on the line by the covering Martin Cranie. You got the feeling that the visitors would live to regret that missed opportunity and they did. Town, backed by terrific vocal support had a number of second half corners, which despite excellent deliveries went begging, but their moment of magic came. Midfielder Emyr Huws drive from 25 yards, was deflected by an attempted block from Jack Hobbs past de Vries off the bar and clearly across the line. Nottingham Forest will be disappointed to not be going back with the 3 points, especially after the Burke/O’Grady chance, however on the balance of play a point each was a fair result. 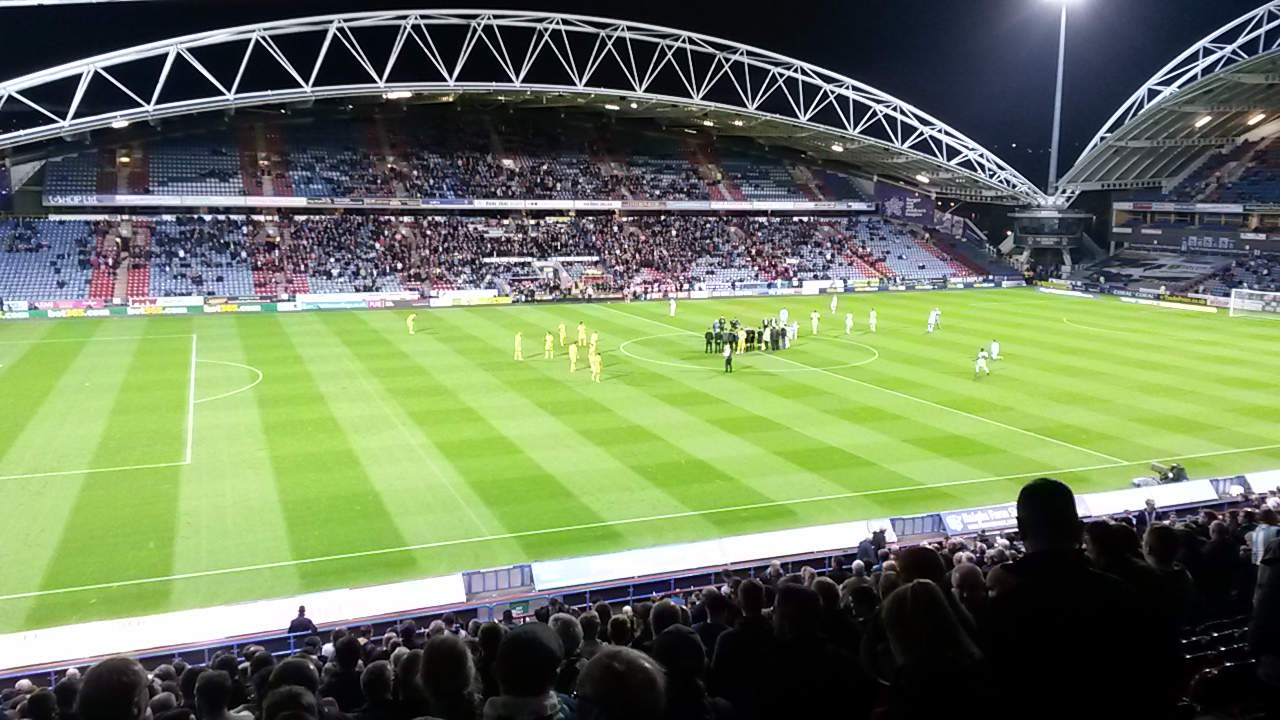 Atmosphere 4/5: With the game being Thursday night and on Sky I didn’t expect much of an atmosphere but was pleasantly surprised. Really liked the vocal Town support behind the goal and in the corner of the Britannia Rescue Stand with the drum, got behind their team for the whole match.

Location 4/5: Easy to find and get to, free parking just under a mile from the stadium was an added bonus.

Pie Rating and Pint Rating n/a Both not sampled, for the former it was Hollands pies on offer.

Programme 3.5/5: Scaled down version, but only £2 and liked the retro style cover inspired by a programme a previous clash with Forest.

Character 4/5: Normally I find a ‘new build’ lacks character, but for me the John Smith’s Stadium has a lot of it.

Stewarding 4/5: Seen but not heard (or noticed), which is a plus in my book! Fans behind the goal were allowed to stand all game, again a plus.

Overall 4/5: Enjoyable Championship encounter and a ground with real quality under the lights.

You can keep up with Peter’s 92 on his the92.net profile here. Have you been to the John Smith’s before? Add it to your 92 here www.the92.net/grounds or plan your trip using our away day planner here www.the92.net/plan-your-away-day/.