York City’s step towards a new stadium moved closer as recently extra funding required was approved by the local council. We caught up with Steve Carroll, writer for The York Press to find out a bit more about the project.

Groundsman: This week the funding for the new community stadium project has been approved – what will it mean for both the club and the local area?

The funding agreement should see development move on apace for the building of the new community stadium. It has been a long time in the offing. Plans for a new ground for York City were first mooted more than a decade ago and it has taken an awfully long time to get to this point. For the club, it could mean a new lease of life. While moving from the heart of the city to an ‘outside’ location will mean fans will have to significantly adapt their match-day habits, commercially it makes sense for City.

Their income generation and hospitality prospects at Bootham Crescent are very limited. For example, their boxes currently face on to a car park rather than the pitch and they will have much improved facilities for entertainment, conferencing and the like. The impact of this on the club’s finances should not be under-estimated. They are also expecting a rise in attendances on match-days following the move.

This is partly driven by the belief that, in newer and more comfortable surroundings, more families and people who have attended only occasionally in the past will be more inclined to turn up to watch games.

Groundsman: Are you in favour of the move or would you have preferred the club stay and redevelop what has been their home for over 80 years?
While Bootham Crescent is beloved by many, including myself, it also looks what it is – a ground which is more than 80 years old. The club is forced to spend a lot of money each year just maintaining its current state, never mind improving it. Bootham Crescent is right in the heart of a residential area and I feel a redevelopment plan could have been very difficult to get through planning so, in my opinion, it has always left questions of building on what York currently has pretty redundant.

You see the difficulties that other football clubs have had in trying to re-develop in similar areas. Buying up properties around their ground has never been an option for York City. There are very few stadia built these days that are anywhere near concentrated numbers of housing. It’s just a fact of 21st Century life that if you want to watch football you have to do it out-of-town.

Groundsman: It will be sad to see another old style ground with bags of character be replaced – does the new ground carry some of this over?
It’s hard to say what the new ground will provide since detailed drawings and plans are yet to be published.

Groundsman: What will be your lasting memories of Bootham Crescent?
There are many. The 75th anniversary game there, although it ended in a defeat to Rushden & Diamonds, was a great occasion while the FA Cup game against Fulham in 2002, when it looked like the club could be facing extinction, was a packed-out and emotional affair.

There is something about night matches at these old grounds that is really special. It might just be the glare of the floodlights in my eyes but they always feel like occasions. That’s something I will miss. 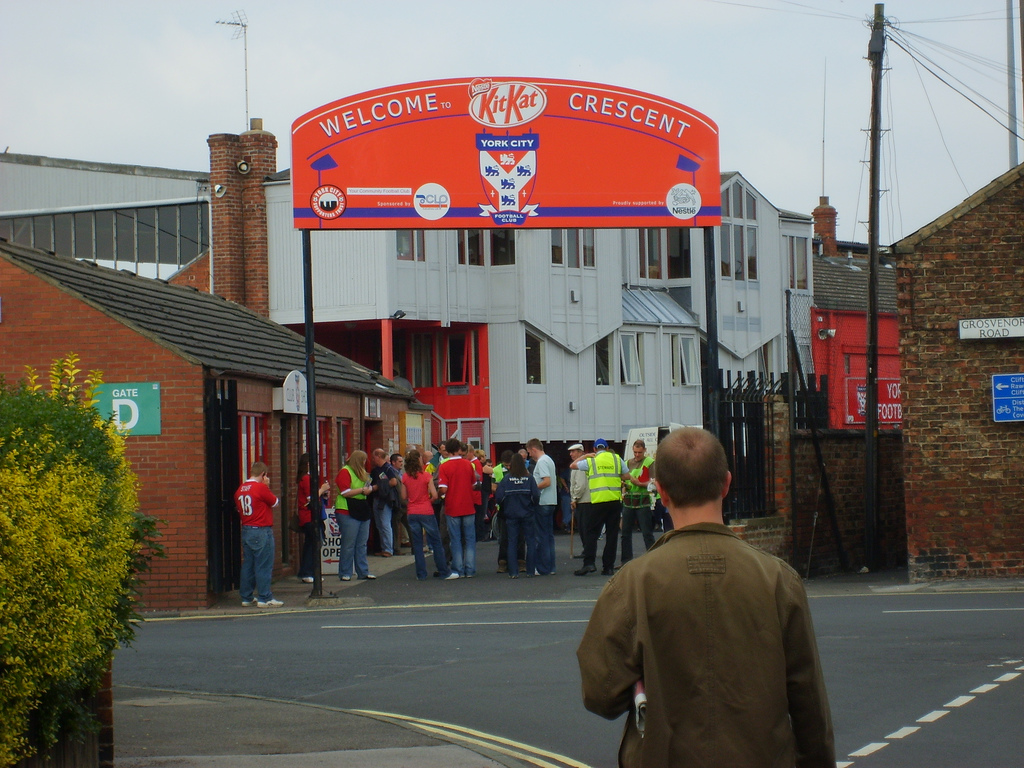 Groundsman: The ground is widely known for the period it spent as Kitkat Crescent – is there any inclination that the naming right of the new stadium will be sold?
Given that the club was very pro-active in negotiating a stadium rights deal while at Bootham Crescent, it would be a surprise if they, or others involved in the project, didn’t entertain offers for the naming rights at the new Monks Cross-based ground.

I can’t think, off the top of my head, of many new grounds that haven’t been opened without a headline sponsor in recent years so it would be a surprise, given the financial opportunity it provides, if that didn’t also happen in this case.

Groundsman: We can’t let you go without finding out a little bit about your 92 – how of the 92 league grounds have you ticked off?
Not as many as I would have liked, given York City played in the Conference for eight years, but I would estimate about 40.

Groundsman: So far which have been your best/worst and why?
As a journalist, the best facilities I have experienced have been at Ipswich. This is going back a few years but they had an entire complex for media in an era where you couldn’t even get a cup of tea at some grounds.

As a fan, my home town team is Middlesbrough so it would be remiss of me not to praise the Riverside Stadium. Otherwise, I very much enjoyed visits to Leicester’s old ground at Filbert Street.

I was always in awe of the fact that you basically walked through someone’s back garden to get to the away end, which was set back from a row of houses.

There’s been a few where I have had better experiences but, professionally, it wouldn’t be right to name and shame!

Thanks to Steve for taking the time to speak to us about York City’s community stadium project. To keep up with the move head to The York Press Sports Desk www.yorkpress.co.uk/sport, you can also follow Steve on Twitter @scarrollPress. Have you been to Bootham Crescent before? Tick the current home of the Minstermen off your 92 here or if you’re planning to get there before the new ground arrives use our away day planner.