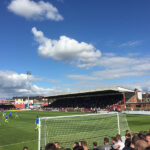 Pools fan Ross Hamilton-Milburn ticks off his first ground of the new season as Hartlepool travelled to York. Ground: Bootham Crescent 15/92 Game: York 1-2 Hartlepool United Date: 15/08/2015 Thoughts on the ground: Bootham Crescent is one of those proper old fashioned football grounds you normally only ever see on one of the million ‘football from the past’ twitter accounts that seem to exist for some reason. For a start, on the approach to the ground you walk past things called ‘houses’ as opposed to through an industrial estate like most modern stadiums are. The turnstiles look like they’ve come… Read more » 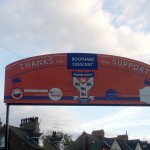 Blogger Michael Pilcher reports back on heading to York City’s Bootham Crescent in his quest to join the 92 club. Ground: Bootham Crescent 67/92 Game: York City 1-1 Mansfield Town Date: 25/10/2014 Being married has played havoc with my attempts to do the 92. Before, I could whittle myself off to all four corners of the country for games without any problems; now I have “commitments” I can’t get away with that. A game on the weekend of my 6th wedding anniversary was going to take some serious form of bribery. I picked York as the Mrs and I had… Read more » 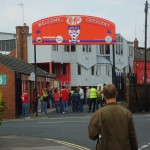 York City’s step towards a new stadium moved closer as recently extra funding required was approved by the local council. We caught up with Steve Carroll, writer for The York Press to find out a bit more about the project. Groundsman: This week the funding for the new community stadium project has been approved – what will it mean for both the club and the local area? The funding agreement should see development move on apace for the building of the new community stadium. It has been a long time in the offing. Plans for a new ground for York… Read more »