Blogger Michael Moss follows up a double header to an eventful visit to Valley Parade with a trip along the M62 to Bloomfield Road, where Blackpool hosted non-league Kidderminster Harriers in the FA cup.

Sunday had a sombre start, as we prepared for our visit to Bloomfield Road. Blackpool were hosting non-league Kidderminster Harriers, with the potential of another cupset. Before leaving Bradford, we darted back to the stadium to get some snaps of the ground. Specifically the memorial to those 56 souls that tragically lost their lives on May 11th 1985 in the Bradford Fire Disaster. 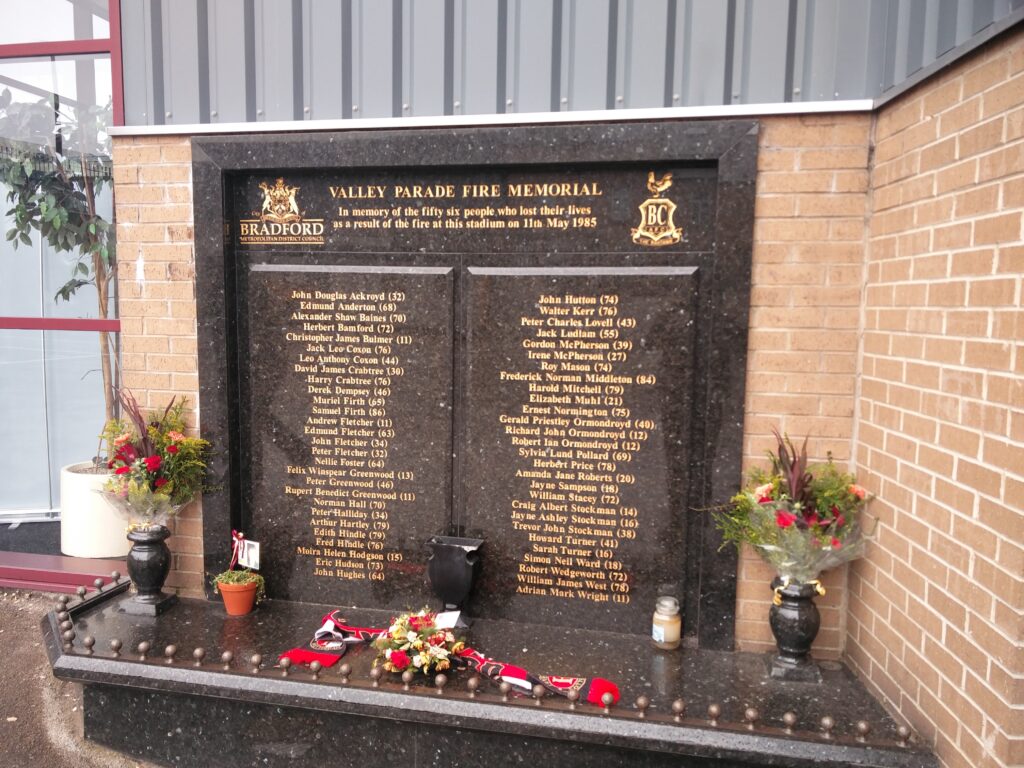 Once done, we shifted gear and were soon hurtling on the M62 as we sailed over the Pennines. We caught glimpses of the Macron Stadium and Deepdale, home to Bolton Wanderers and Preston North End respectively. Our approach into Blackpool was rewarded with a view of the famous tower before the stadium came into view. As we got into Blackpool, we found some free parking, and took a walk around, wanting to find a fry up. 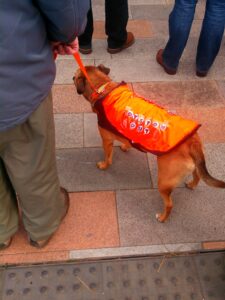 As it was the end of the holiday season, the first couple of places had reduced menus… No sausages, no beans… What the heck! We eventually found a cosy little family run cafe, where the staff were brilliant. A cuppa and a plate full of well-cooked breakfast later, and we were back outside, embracing the chilly November afternoon.

We got to the stadium to find the “Oyston Out” brigade in full force. After observing the protest for some time, we walked around the stadium. A question in our heads though. Which end do we sit in? The home end would be desolate and devoid of the hardcore fans. Or with non-league away fans looking for a cupset. We continued to discuss and ponder, whilst also noticing a large number of Kidderminster Harriers fans milling around. Actually, there was quite a significant amount of away fans, having made the 140-mile journey up to Bloomfield Road. This helped swing our decision, and tickets were purchased in the Kidderminster end for the cheap price of £10.

Blackpool has a lot of legends in the ‘former players’ category on Wikipedia and have a few statues placed around the stadium. One caught my eye, Jimmy Armfield, but more peculiarly a certain fact listed on the plaque. His last game was against Manchester United on the 1st May 1971. It was also one of Paddy Crerand’s last games for Manchester United, in which he got sent off. I knew my Dad had attended that game, and here I was, some 45 years later, ticking it off. 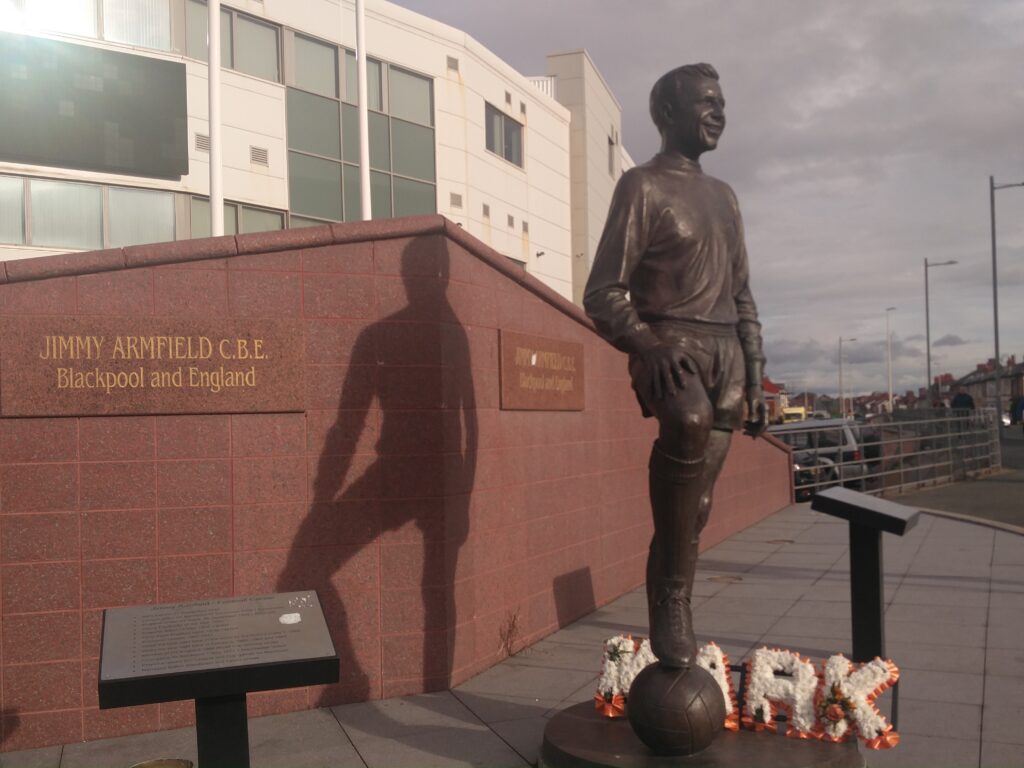 The Jimmy Armfield statue was one of many former players remembered around Bloomfield Road.

We approached the stadium, the protest had taken a stronger stance now. Some rowdy man was on a megaphone, connected to a van full of speakers. He was belting out some cracking, albeit colourful abuse at the owners. Other fans continued to lob produce from the greengrocers at anyone who went in through the VIP section. All very entertaining, whilst something else struck me. I last saw Blackpool play at Old Trafford when they were relegated from the Premier League. Now, just six years later, they are muddling around in the 4th tier of the English football league structure. A sign of just how badly run this club must be, joining a worryingly growing list.

We ambled into the ground. The security seemed more grumbly than you’d usually find. Maybe the protest was wearing thin. On wanting to get our “Doing the 92” flag up on some of the thousands of empty seats, we were denied. There were maybe 2,000 Kidderminster Harriers fans, compared to the 1,500 or so home fans. For scale, Bloomfield Road holds around 16,500.

Due to the low turnout of fans, only the Main Stand was open for business. The Kidderminster Harriers fans were packed into one-half, whilst the Blackpool fans were sparsely dispersed in the other. The atmosphere was strange. A decent sized stadium with more away fans? Bizzare to say the least.

As the game was starting, the Kidderminster fans started some purple flares just 5 seats to the right of us. Although it impeded our view a little, the atmosphere was buoyant and excitable, the fans optimistic of a cupset. The football, on the other hand, had little of the other flair required. Blackpool cautious to avoid said Cupset. Kidderminster and their players showing their non-league level with some fairly basic football devoid of any intelligence. 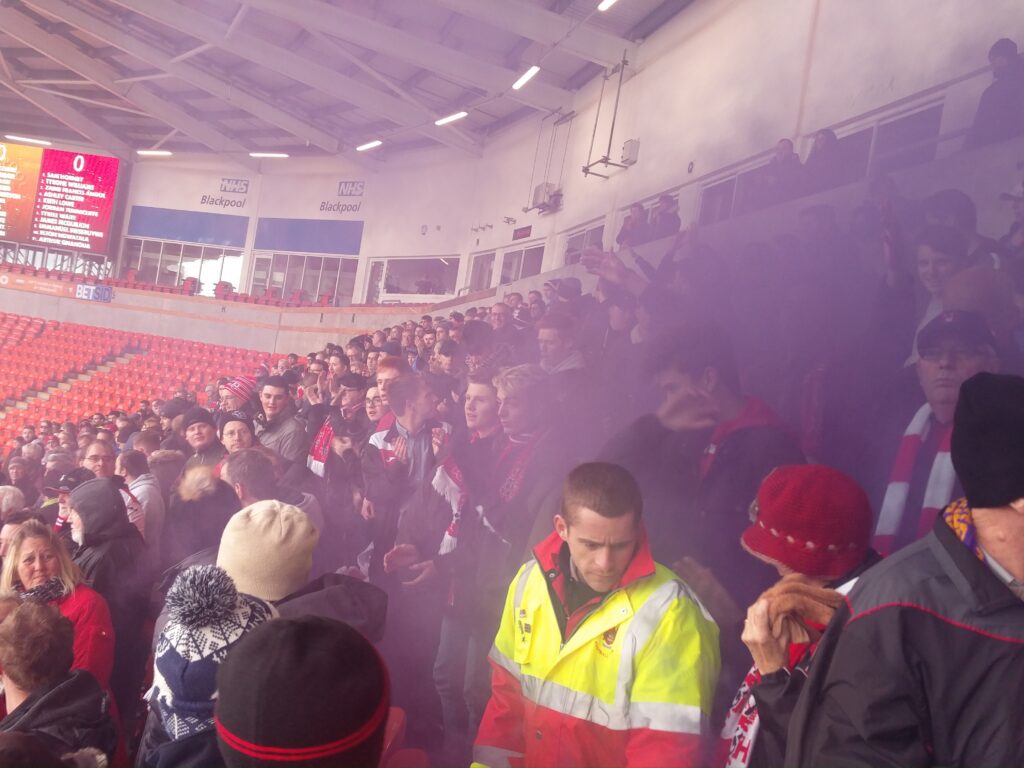 Kidderminster Harriers set several purple flares off at the start of the game.

Blackpool took the lead just before the half-hour mark when former Kidderminster man Jamille Matt nodded home a hooked-in cross from a throw-in.

Ten minutes later, a powerful run from Matt Potts was smashed in from the edge or the box, after his initial shot was blocked. Kidderminster kept pushing to get back in the game. Blackpool were smarter and showed their pedigree in controlling the game.

From a fans perspective, there was little of note, other than good solid volume from the Kidderminster fans.

With the game done, we both agreed that the weather was colder than either of us had expected. We were, therefore, a little peckish. A local chippy came into view, where we were able to pick up some chips and battered Mars bars to give us our fuel. With our new yield, we then both took our time to walk down to the seafront, taking in the sights, sounds and smells, as the holiday season was winding down. We picked up some traditional rock for friends and family from one of the many stores, whilst chuckling at the rude holiday souvenirs. 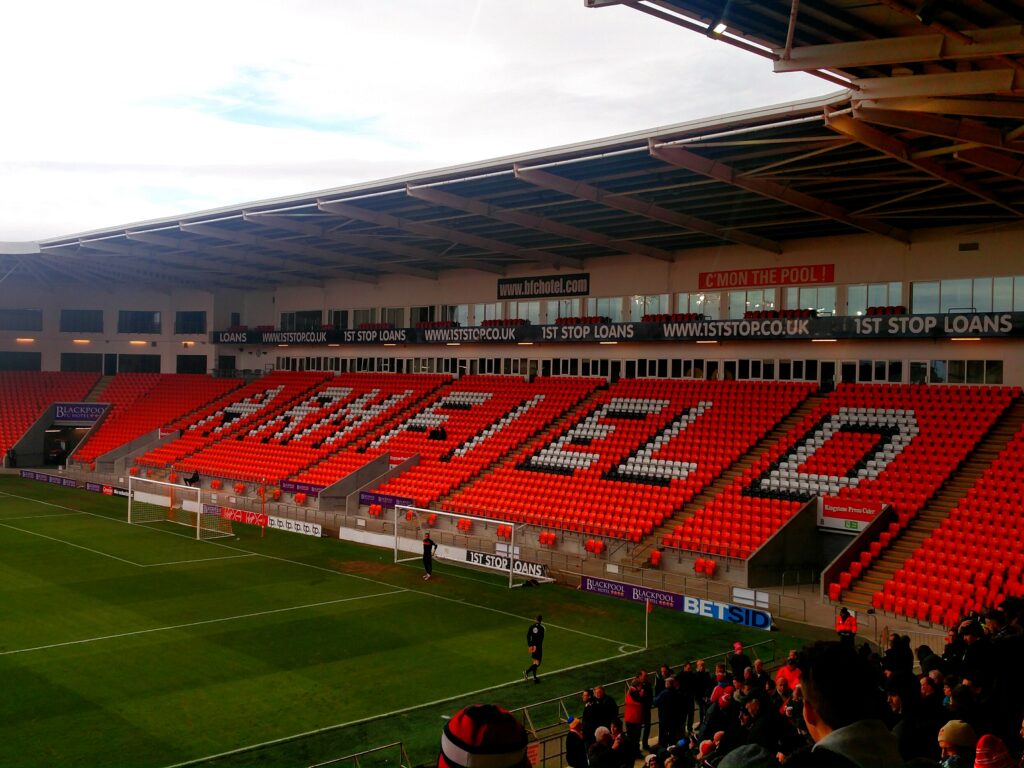 Our enthusiasm was fading with the light and we headed back to the car discussing the doubleheader. We were both pleased to cross off the two grounds, whilst also discussing the perils of the colder than expected weather. The magic of the cup was the cupset from Accrington Stanley although neither game could be described as magic. At both games, attendances were low, impacting the atmosphere, but the ticket price for both games matched the attendances, with a combined total of £25 for 180 minutes of football, this could be seen as a considerable saving, for 90 minutes with some League One and Two fixtures costing somewhat more.

With the Oyston’s well and truly smashing this football club, their fans are hideously absent which obviously impacts the atmosphere. Although recently revamped, the location of Bloomfield Road is a redeeming feature. The strong and passionate following from Kidderminster saved the day really.

Atmosphere 2/5: When you face a non-league team, and they bring more supporters than you, then there are problems. If it wasn’t for the Kidderminster Harriers faithful, this would have been dull. The Blackpool fans were the boring diehards, with the boisterous still protesting outside as the game got underway.

Location 4/5: A short walk to the beach, with plenty of activity nearby. Just what you want from any trip to Blackpool.

Value for Money 4/5: We decided to go in the away end for a crisp tenner. Absolute bargain.

Character 2/5: Before renovation, Bloomfield Road was magnificent. With the renovation and rebuild, the ground has lost some of its charm. The clubs historic players are rightfully honoured with thoughtful statues around the ground.

Stewarding 2/5: Grumpy, uncoordinated and unhelpful. With so few fans to steward, I am of the belief these people must be volunteers. Basic questions were greeted with disdain.

Overall 1/5: Although charming to see Blackpool beach and the tower, I am in no need to see it again. As for the ground, I not keen whilst the club are failing to attract fans. I remember looking lovingly at images of the old Bloomfield Road, but all charm and character are removed in a bid to ‘modernise’ whilst ‘alienating’ the fans the modernising was to try and appease. Never forget your roots.

You can keep up with Michael’s 92 on his the92.net profile and on Twitter @mossintheworld.

Have you been to see the Tangerines? If yes, you can tick Bloomfield Road off your 92 checklist or, if not, plan your trip there: