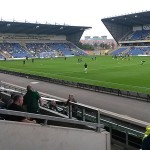 Blogger and Yeovil Town fan Peter returned to the Kassam Stadium as the Glovers looked to build on an impressive comeback against Luton. Ground: The Kassam Stadium 49/92 (2nd visit) Game: Oxford United 2-0 Yeovil Town Date: 29/08/2015 Being a Yeovil fan hasn’t been the most pleasant experience for the past couple of seasons. After successive relegations and pretty much an entire new squad, which haven’t really looked like starting to gel talk of the dreaded successive triple drop has started to rear its ever so ugly head. However after last weeks comeback from 2-0 down at Huish Park against… Read more »