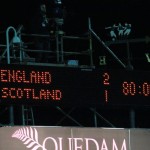 Blogger Dan White recounts making the long trip from Yorkshire to Somerset to see some stars of the future as England under 16’s took on arch rivals Scotland. Ground: Huish Park 2/92 Game: England U16 2 v 1 Scotland U16 Date: 20/11/2014 Thoughts on the ground: Before leaving the hotel to get to the game, I ended up bumping into a football agent who works for West Bromwich Albion who went under the name of Mr Taylor. He told me that he recruited Scotland’s #3, Dan Meredith, from Cheltenham Town for £10,000. He was nice enough to pay for my… Read more »