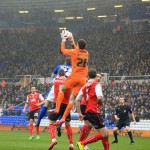 Dan White continues doing the 92 heading to England’s second city to see the Blues – Birmingham City. Ground: St Andrews 12/92 Game: Birmingham City 2-1 Rotherham United Date: 03/04/2015 Thoughts on the ground: One of many places I was not looking forward to visiting. Mostly because of stories I had been told about the city by my mum and friends of mine. But like many places on this list, I don’t really have a choice about where I have to go for this challenge. So why did I chose Birmingham? Since I had done some pitch side photos with… Read more »

After Aldershot was drawn against Fleetwood on the FA Cup second round we decided to look for games in order to make a weekend of it. Luckily enough Birmingham were at home on the Friday against Middlesbrough. Our last attempt to visit St Andrews was an ill-fated affair when we ended up going to Nottingham Forest, despite having tickets for Cardiff v Burnley and Birmingham v Newcastle (both called off). I was really looking forward to this game as St Andrews was a ground I’d always fancied visiting. After dropping our stuff of at the hotel we got a taxi… Read more »