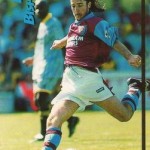 Budding journalist Alex Metcalfe caught up with former West Ham and Manchester City midfielder Ian Bishop to find out about his experiences of the 92 league grounds over a 20 year career. Alex: What was the best atmosphere you ever played in? Ian: The old Wembley was up there – or the 1991 FA Cup semi-final at Villa Park, it wasn’t the stadium itself, it was the atmosphere created by those West ham fans that made it. Alex: The worst atmosphere? – a grim one on a Tuesday night. Ian: The Odsal when Bradford had to play there (following the… Read more »