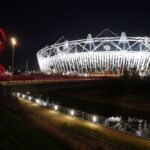 West Ham United are one of England’s oldest and most prestigious football clubs. After plying their trade at the Boleyn Ground since 1904, the Hammers are set to move to the vacant Olympic Stadium at the beginning of next season and Slaven Bilic’s men are playing some lovely football that is certainly suited to their new home. West Ham are on the cusp of challenging for a Champions League spot this season and, with a bit of luck, their star men may lead them to Europe’s elite club competition. The Boleyn Ground, otherwise known as Upton Park, has been a… Read more »